Dhaka Muslin: back from the dead? 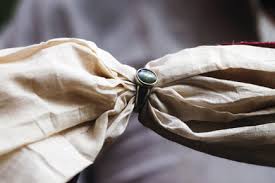 People in the Indian subcontinent often like to sing of their ‘glorious past’. One of the legends one hears is about the legendary muslin cloth produced in India, so ‘thin that an entire muslin saree could pass through a finger-ring’.  Really?  Why isn’t this marvellous cotton cloth seen today?

Muslin, once weighed against gold in the markets of Western Europe, was a casualty of British colonialism and the industrial revolution  — twin processes which reduced the Indian sub-continent into a supplier of raw material and a captive market for manufactures.

The popularity of the new textiles, saw the death of the  art of spinning and weaving . But the greater tragedy is that ‘Gossypium arboreum’, the species of short-fibre cotton plant from which muslin was made has also disappeared and has become extinct. The reason is evident. People stopped growing this cotton plant.

With the plant and the weaving technique extinct, what is being produced today is a coarser version called ‘jamdani’. Even so  jamdani is recognised by UNESCO as a ‘Masterpiece of the Oral and Intangible Heritage of Humanity’.

One man, a Bangladeshi,  set out to revive the lost art of weaving Dhaka muslin — the diaphanous, cotton cloth long coveted by royalty from China to Europe — Shahidul Alam is his name. He undertook an almost impossible task . Alam  set up  DRIK,  after returning to Dhaka from years spent teaching chemistry in London.

Alam travelled to museums in Europe, Asia and North America searching for samples of the finest muslin that left the shores of Dhaka centuries ago. “Most of the history of muslin was written by foreigners and I wanted to tell our own version of how muslin became extinct, through investigative research.”

Muslin, locally called ‘khas malmal’, needed not only the right fibre but also the sharp eyes and nimble fingers of young girls between 18—30. “More or less, every village near Dhaka city was famous for weaving at that time, but Sonargaon, Dhamrai, Titabaddi, Junglebari, and Bajitpur were especially famous for the near transparent muslin,” says DRIK research leader Saiful Islam.

Political upheavals and demographic shifts of people, castes and communities shattered the unbroken lineage of craftspeople involved in producing muslin. “Haji Kafiluddin, who died five years ago, was the last recognised master. Today, there are many excellent craftspeople, but few schooled by the masters,” Islam says.

The plant that produced the finest qualities of muslin cotton, locally called ‘phuti karpas’, grew by the banks of the Meghna river and become extinct 160 years ago. So DRIK research focused on getting to the seeds of the nearest varieties, wherever available.

The efforts are paying off. “We have knowledge gleaned from researching the plant and that includes studies carried out during the British colonial era to understand the ideal growing conditions. We resorted to DNA fingerprinting and matching trials with seeds imported from global research centres and expect very positive results,” says Islam.

The best time to spin the cotton yarn was in the early hours of the day or late afternoon, when the humidity and temperatures were just right. Muslin had to be tough yet soft and fine and this called for measured application of pressure at the right points during the spinning process.

“We have a unique craft, with a large cultural and economic value. Reviving the cotton species and redeveloping the spinning and weaving processes calls for knowledge, cultural investment, research and government support,” Islam says.

“The number of threads you can squeeze in a specified area depends upon the fibre that’s used. Thinner the fibre, higher will be the thread count and better will be the quality. This saree has a thread count of 300. It indicates that it has the fineness of Muslin,” he said. Historian and museum curator, Firoz Mahmud, said that that muslin is a light cotton fabric, finely woven and typically white in colour that was first imported from the Middle East to Europe in the 17th century. It derives its name from Mosul city in modern-day Iraq. Dhaka and Masulipatnam (in South India) were the two most important centres for the production of muslin. 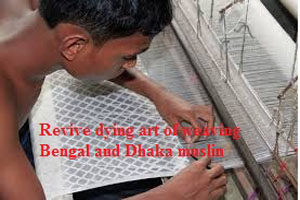 He said that at its best, muslin would be so light and fine that one yard of the fabric weighed barely 10 grams and six yards of the fabric could pass through a ring of the index finger.

“For weaving the famous Dhakai muslin, weather and cotton were the two big factors. Earlier, the best quality muslin was woven on the banks of the Shitalakkha river from locally produced White Corpus cotton,” said Mahmud.

Dr. Hosne Ara Begum, Head of the Department of Yarn Manufacturing at the Bangladesh University of Textile Engineering, said that muslin cloth must have a thread count of over 250.

“Higher the thread count, softer will be cloth. Muslin was legendary because a 50-metre-long piece of muslin fabric could be squeezed into a match box,” she said, adding that the cloth that has been produced by the weavers for Drik has a thread count of 300, giving it the fineness of muslin.

With genetic research and bio-engineering, it might just be possible to produce a strain of cotton nearest to the extinct ‘Gossypium arboreum’. Let’s see what will happen in a few years from now!