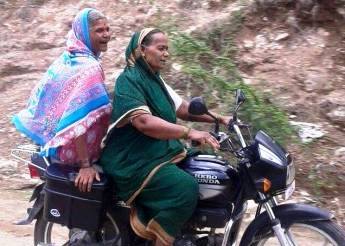 Today’s India offers a lot of opportunities to women, with women having a voice in everyday life, in the business world as well as in political life. They are the backbone of every family and society. Nevertheless India is still a male dominated society, where women are often seen as subordinate and inferior to men but the worse condition is of elderly women.

Old women who are single, abandoned or widowed face multiple barriers due to illiteracy, malnourishment, abuse, ill-health, lack of housing and exclusion from economic benefits.

According to a 2008 UNDP study, 65 per cent of widows in India are over 60 years old. Of these, only 28 per cent are eligible for pension. However, only 11 per cent actually receive it.

Eight per cent of the elderly are in rural areas, with 40 per cent below the poverty line and over 73 per cent illiterate. Worse, 90 per cent have no social security cover and 50 per cent of bedridden days are ascribed to elderly patients.

Also in the Global Age Watch Index 2014, India ranks 71 among 96 countries in elderly (60 years plus) care. India has the second highest population of elderly in the world, projected to rise to 12 per cent of the total population by 2020 as reported by an English Daily.

Elderly women face bias and discrimination throughout their life and most of the time they do not raise their voices against it.