Congress rebel and former Arunachal Pradesh CM Kalikho Pul,  was found dead at his Itanagar residence on Tuesday. He allegedly committed suicide.It is believed he hanged himself from a ceiling fan.

Congress President Sonia Gandhi expressed shock “at the untimely and tragic demise” of Kalikho Pul, the man who broke away from the Congress and joined the BJP in an illegal bid for power. Thanks to a controversial move by the Governor, Pul hung on to the Chief minister’s chair, until a  decision by the Supreme court declared his government illegal.

Mr. Pul who was just 47 allegedly hanged himself from the ceiling fan in his bedroom. He was found dead at the chief minister’s official residence, which he was yet to vacate. He survived by three wives and four children.

The circumstances behind the death are still not clear.

Congress party member Ninong Ering said “I am really shocked, I don’t know what extreme reasons lead to this,” Pul had been chief minister of Arunachal Pradesh for four-and-a-half months in early 2016.

“He was staying in CM’s House, maybe loneliness crept into him. When your mind is empty, its a devils workshop …As per his (CM’s) last conversation with him, he was positive about the state. He said he was sure people will choose him again,” Ering said.

Mr. Pul had led a group of dissident MLAs from Congress against the then Chief Minister Nabam Tuki early this year. 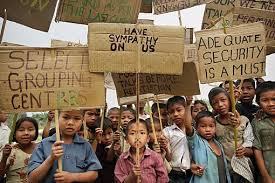 Brus demand their own ‘Reservation’