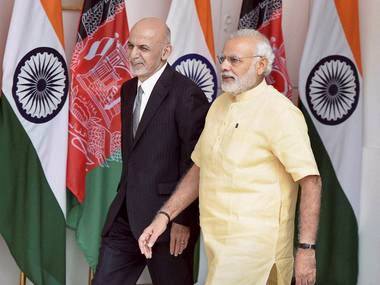 New Delhi: “Every Indian is now contributing one US dollar to Afghanistan,” said Afghanistan President Mohammad Ashraf Ghani on Wednesday,(14 Sept) even as he called for greater regional cooperation in South Asia.

He also said Pakistan should not feel threatened by bilateral cooperation between peace-loving countries.

“We do not have agreed rules of the game between states (countries). South Asia has this misfortune,” Ghani said while delivering a lecture on the topic ‘Fifth Wave of Political Violence and Global Terrorism’ at the Institute for Defence Studies and Analyses.

In an oblique reference to  Pakistan, he said: “If a country is feeling threatened by cooperation of two peace loving countries, that country (Pakistan) has to change.”

Ghani said collaboration between India and Afghanistan is for stability in the region and it is “transparent” and guided by “common values” and “common threat”.