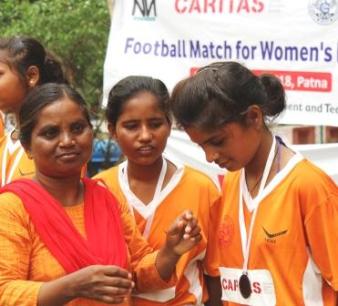 While Christano Ronaldo may be the flavour of the season as the Fifa World Cup unfolds, let me tell you about another sprightly little football player. No, she won’t make it to Russia this year, but that’s not gonna stop her from fighting her own battle to stay in the beautiful game in her small village in Bihar.

Here is her story:

A few years ago, thirteen year old Punti would sneak out of her house in the afternoon, get on her bicycle and pedal furiously towards her soccer practice ground, some 15 kilometers away. Her father, Subedar Paswan, a construction worker and stone-mason was dead-set against his daughter running around outside the house. Punti’s mother and elder brother would cover for her. Her father would usually be away from home, but if he was in and noticed that his daughter was not around, Punti’s mother would say that she had sent her out on an errand. Punti is the second youngest of three girls and two boys in her family.

“My father was very firm. He said that football was for boys and not girls. Somebody had told him that girls who played football would have health problems later,” Punti recalls. “My mother was my greatest support. When she came to know that Pratima didi’s organization, Gaurav Gramin Mahila Vikas Manch, was teaching girls about empowerment and football, she encouraged me to join. She told me- don’t worry, I’ll handle your father. You just go and play.”

Pratima and her organization, who partnered with Caritas Suisse for this event,  have, with support by CREA (Creating Resources for Empowerment in Action ), so far introduced over a thousand girls to football in Bihar.

Later on, Punti played her first match, which was a draw. The NGO who organized the match gave all the team members medals. Punti excitedly took her medal home and showed it to her mother. “I was so excited, I forgot all about my dad’s objections to my playing!,” she recalls. “Pratima Didi also spoke to my father and explained to him how football is actually good for health and self confidence. My father at first stared at me, as if was really angry, but he couldn’t hide his happiness. From then on, he said, “you go and play, and do well.”

When Punti reached the age of fourteen, her neighbours and some other people, including relatives began to criticize. They told her parents, “Your daughter has no shame. She runs around in shorts and plays football in an open field, she should be modest and stay at home.”

“My father firmly supported me. He said he was proud of the medals and prizes I have won. He told me not to worry about criticism, and just to do better in my game. The same father who would not want me to roam about in my village, now readily gives permission for me to attend games in other districts like Arwal, or to come for this Football for Equality event.”

For Punti, football has opened up her life to many possibilities. “I am an attacker, or forward in my game. The thing about football is that we girls can express ourselves, run, kick, dribble, jump, shout. Part of our training is also about our bodies, about the fact that we have equal rights with boys. Not long ago, there were some boys who tried to harass our team of girls who were practicing on an open field. They picked a fight with us and brought sticks to threaten us. We snatched their sticks and beat gave them a beating with their own sticks. Then we went to the police station and complained about them.”

After this incident, a few of the girls’ parents stopped them from going out to the field. My dad and brothers however, said, “You did great, standing up for yourselves and thrashing those hooligans! Those boys deserved it.”

Football, says Punti has really changed her life. “I am happy that Caritas Switzerland invited us to play and they have gifted us new footballs and football shoes. We hope that people like Caritas and others will ask the government to announce benefits for girls who play football.”

2 Responses to "Her Dad was the biggest roadblock, now he’s first on the cheering squad!"