An Agnostic Deconstructs the Bible Mahotsav 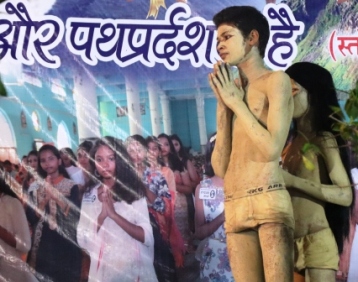 In these troubled times, and despite what the apologists for a particular political regime want to say, these are definitely troubled times; three thousand Catholics, over half of them the rural poor, congregated at a church in Patna to acknowledge the source of their faith. And for so many who came, this was an act of courage, of witness, a standing up for what they believe in.

Targeted violence against  Christians, regardless of denomination, had started as a trickle in 2008, and after 2014, these attacks have become a flood. Self-appointed gangs who have usurped the ‘Hindu” nomenclature  assault pastors, priests, nuns, and ordinary Christians at will, enter private houses and places of worship and create mayhem and violence, threaten and intimidate Christian school and hospital administrations, while a government that promises ‘support for all, development for all’ consistently looks the other way.

Barefaced lies, innuendo, and a consistent smear campaign against religious and other minorities in India by the so-called mainstream private TV channels is blatantly in-your-face. Politically aligned TV channels and Internet blogs alike spread hatred against Indian Christians in general, and push the idiotic  narrative that the Catholic Church, ( which, in reality an entity that took root in South India in about 52 CE) is an agent of the Vatican, which is in Italy, and that the Vatican in turn is an agent of the Italian government, which in turn has a devious plan to return Sonia Gandhi (an Italian by birth) and the Indian National Congress to power in 2019.

When Ministers and Chief Ministers openly endorse what the Union Government officially  dismisses as the ‘fringe groups’:  gangs that lynch Muslims and spread terror in the name of cow protection, invade private prayer meetings of Christians and smash furniture and tear up Bibles in the name of protecting Hinduism, beat up and threaten liberal Hindu priests like Swami Agnivesh and also interfaith couples in the name of protecting Hindu culture, and when similar incidents have begun happening in Bihar, there can be no doubt that very idea of India as enshrined in our Constitution is under strain. And perhaps this is the time for prayer, reconciliation, and universal love.

And that is why this coming together of 3,000 or more Catholics is so significant in a wider context. 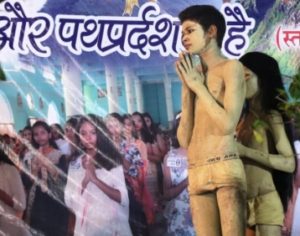 Now, I fancy myself as a journalist, and a professed agnostic, some say a ‘catholic agnostic’. Some confuse the word with ‘atheist’, so let me set you right- an agnostic believes in God, but questions the rituals, rules, premises and rigmarole of organised religion; so in other words you won’t find agnostics performing some mindless Puja to ward off the evil eye, or kissing Bishop’s rings, or flocking to statues that begin shedding ‘tears’ or ‘drinking’ quantities of milk,  or spreading suspicion of other religions. A practicing  agnostic has probably read the Bible, the Koran, the Gita, several books on different religions and his or her ‘faith’ is  highly personal, reasoned and experienced. Many well known saints started off as agnostics!

So, how does one look at the significance of this Bible convention? One of my  Protestant friends smirked a little and said -big deal, we have huge revivals where literally twice that number come- why are they making such a song and dance about it? Jokes apart, let’s see why this is relevant. 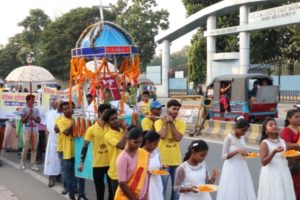 Reverence and atonement: The symbolism of carrying the Bible in procession, in pomp and grandeur, with incense and aarati, and petals strewn before its path was an act of reverence for what is at the core of Christian belief. It was an act of adoration and atonement, a prayer to the good Lord to forgive the sins of those who in their ignorance and fear, seek to destroy, burn, and tear up holy books. For the practicing Catholic, the Bible is the Superbook, a source of inspiration and faith, open to several contemporary interpretations, but consistent in one thing: the love of  Jesus and his way of embracing the universe is the central  truth.

Thanksgiving and freedom: The sacrifice of Holy Mass was offered in thanksgiving for all the good, all the positive, that the pilgrim church in Bihar has received. It was an act of thanking the creator for the opportunity to serve all the people, and also an acknowledgement of the support and love received from all people, of all faiths in the past one hundred years. 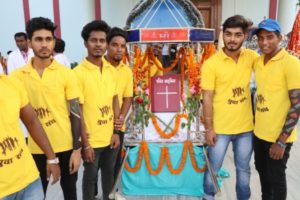 The word of God and its inspiration to feed the hungry, clothe the naked, heal the sick is at the core of the social action centres, the hospitals, the schools and colleges, the environmental action, and the vocational training centres run by the catholic Church. Through its option for the poor, the Catholic Church in the 21st Century Bihar does not merely distribute loaves and fishes, it empowers the hungry and the naked to access the skills to bake and fish, to exercise their right to access government provisions such as the right to food, the right to education, and so on. Christ never said ‘serve the Christian poor’, he said ‘Love your neighbour as yourself’, and your neighbour is anybody who needs your service, regardless of caste, gender, faith or political affiliation.

Speaking Truth to Power: Even in the face of persecution, direct or indirect, Christians will continue to speak truth to power, no matter what. In the vitiated discourse of post-2014 India, where anybody who dares to speak up against injustice or reveal an inconvenient truth is labelled ‘sickular, anti-national, urban communist’ and what not, the Catholics of Bihar have signalled that they will continue speaking truth to power in their own small ways. Why? because the Bible tells them so. 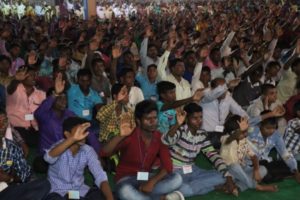 It is the Bible that gives examples of those who spoke truth to power, and those in power treated many of these ‘news carriers’ with ridicule and scorn, and some of these were put to death. Over the years, powerful vested interests have opposed Catholics and others uncovering the truth, or spreading legal information to help the struggling poor. The list includes landlords still holding illegal land, Public food distribution outlets cheating the poor and denying them their subsidized rations, and  feudal forces who believe that the lower castes should remain illiterate and disempowered. The Church therefore rejoices in the courage and faith of those, including two catholic priests, who lost their lives (or were murdered) because of their faith in action.

The 100 year old Patna Archdiocese celebrates the liberating actions of its martyrs in Sasaram and Mokama, and gives thanks for those committed Catholics who continue their solidarity with the poor despite numerous threats and false accusations from different quarters. 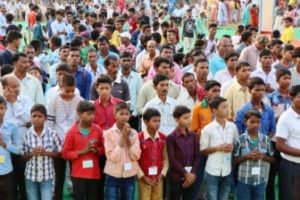 Affirmation, Nation Building: What struck me most about the Bible Mahotsav, was that most of the delegates from Bhojpur, Magadh, Mokameh, and elsewhere were from the rural labouring masses. Every one of them had paid the registration fee, and had arranged for the cost of their own travel to and from Patna. These were men and women in their forties and fifties, with careworn faces, the ones on the frontiers, the most vulnerable to the intimidations and threats of the ‘Ghar wapsi’ brigade. They came in their everyday clothes. They spoke in their everyday dialects. And they sang hymns of praise and thanksgiving in their homespun, local tunes. The Word is  truly spoken in tongues, and in Bihar it speaks in the tongues of the land, in Maghi, Bhojpuri, Angika and a smattering of Hindi. The hymns of praise and thanksgiving were composed by the people and came from them: kirtans and bhajans which they call isayan. This is affirmation of their regional and national identity. Nothing foreign here. No Christmas Trees and Santa Claus, they haven’t even seen an Easter egg. So where is this so-called ‘cultural alienation’ that is being bandied about?

The young urbanites in their T-shirts and Jeans, the clergy in their cassocks and the religious in their habits, ladies in expensive saris and salwar suits, and the roughly clad tillers of the soil mingled, shared experiences, and affirmed their allegiance to the Word that speaks of a very real and down to earth freedom from slavery, disempowerment, and injustice: the path of collaboration, justice and peaceful coexistence.

The question of conversion: The Bible Convention was a tightly controlled affair held within the high walls of the Church Compound and St. Michael’s school. Only regular Catholics, through their parishes, were invited to participate. The local police station lent a helping hand, with men and women officers present discourage trouble makers from entering. The rules were clear, anybody moving past the registration desk without an ID tag were asked to leave. The action effectively prevented mischief-makers from stirring up trouble. 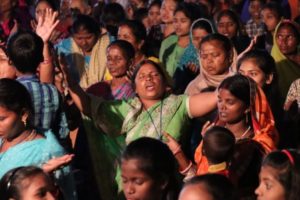 The Bible Mahotsav was strongly about conversion. It was for Catholics to ‘convert’ to a lifestyle based on the gospels, the Jesus way. It was  all about ordinary people sharing their experiences. It was about how a meditation and a reflection on certain biblical precepts brought about a conversion, a change of heart and a change of life. True faith is beyond a religion, it is a way of life.

Strange, this Bible Mahotsav left me with   an insight on ‘conversion’ that was far from fleeting: the Catholics, who for centuries were bound up in the trappings of clericalism and religiosity, and sometimes under the threats of some very violent priests, have evolved to understanding that the Gospels transcend things like religious affiliation and that they are a way of life; and the Hindus, who have always held that bhakti or faith was a way of life, are now being told by some very threatening people that the Vedas and the Gita and other Hindu scriptures are limited to one religion!