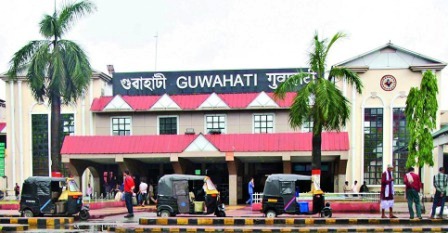 The Guwahati Railway Station became the first ever railway station in Indian Railways to get ISO certification from National Green Tribunal (NGT) for “providing passenger amenities in a clean and green environment.” The CPRO Pranav Jyoti Sharma  of North eastern Frontier Railway said that it has become the first station of Indian railways to achieve this feat at Guwahati railway station.

The NGT had previously directed the railways to adopt strict measures to manage waste in stations across the country, following which the Northeast Frontier (NF) Railway had given consultancy contract for the environmental management system to M/s Caliber Management Solutions in February this year.

M/s Caliber Management Solutions a consultancy firm based in New Delhi and Guwahati started auditing the facilities at Guwahati Railway station from February 22nd, 2019 and completed the work on March 22nd, 2019. The report and certification were received on March 26th, 2019.

ISO is stands for the International Organization for Standardization, which is accountable for setting standards in the activities of various fields. According to the international regulations, there are several types of ISO certification and ISO 14001 for the ecosystem management system. It has been upgraded from the previous 2015. Therefore the certificate is called ISO 14001: 2015. The certification will be reviewed in the year 2020 and due to this; the rules of environment related to the disposal of waste by the Eastern Railway in the area of ​​Guwahati station are being followed strictly.

Use of mechanical cleaning, anti-treatment, quality cleaning, chemical etc., which is already in vogue will be monitored and audited by certified agencies. This means that the passengers will get cleanliness in the station premises. Mr Sharma said that after Guwahati, all possible efforts will be made to provide ISO certification in other major stations including Katihar Railway Station in this railway zone.