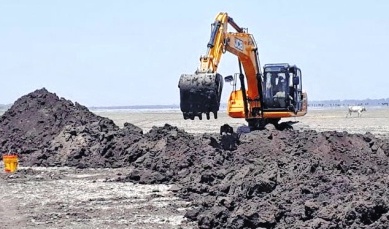 We have grown up hearing the tales of pokhar and talaab (ponds) from our grandparents and parents. Now we rarely get to see to them. It has become victims of people’s greed. In the name of development, beautification and because of increasing waste they have been encroached upon and filled. They have become victims of increasing human neglect. That naturally led to their deaths.

Thousands of ponds essential to store rainwater have disappeared across Bihar in the past two decades due to government’s lack of concern and increasing real estate activity.

According to the official records there were 250,000 ponds in Bihar till early 1990s. These water bodies have declined to a little over 93,000 today.

Patna, Gaya, Darbhanga, Motihari, Muzaffarpur, and in Bhagalpur districts hundreds of ponds have disappeared in recent years, and many others are encroached upon.

In state capital Patna, number of ponds has vanished. The Patna branch of All India Institute of Medical Sciences (AIIMS) was constructed after filling in 35 acres of lakes, as per local report.

Similarly,  Several residential localities have been developed after big ponds were filled. Many parks have come up after filling lakes and ponds. “There were nearly 1,000 lakes in Patna but their numbers have come down to a little over 200

Some of Patna’s ponds, including Kachchi Talaab, Sachivalay Talaab, Manikchand Talaab and Adalatgannj Talaab, are facing difficult times and may not survive for long.

Bihar Pollution Control Board Chairman A.K. Ghosh said “There would be a drinking water crisis in Patna by 2030 after 10 years because the sources of groundwater recharge have been covered with concrete”. Some of the water crisis effects can be seen in present day also.

In Gaya town, Magadh divisional commissioner’s office was constructed by filling in Dighi Talaab. The government itself used pond land for the construction of office buildings, schools and other things. Gaya has been facing a water crisis for long. Dozens of lakes were dug in colonial times to combat the scarcity but they are now rapidly vanishing.

Ram Sagar Talaab in the heart of Gaya town was encroached upon and filled in 2010-11 to transform it into prime real estate. Another pond, Kathokar Talaab, was filled and leveled and a market was constructed there by Gaya Municipal Corporation.

According to Ravindra Pathak, an activist, similar works are being done in other cities as well.

Ponds have been playing an important role in floodwater management for centuries. In times of drought, these ponds used to solve the drinking water crisis.

Today a large part of Bihar is facing an acute drinking and irrigation water scarcity. As per Met department record, the state has been receiving less rainfall compared to the last decade. As ponds disappear, the people are forced to depend on deep bore wells, resulting in declining groundwater levels.

So, now it is an urgent need to save water bodies, including ponds, and the focus should be on recharging groundwater for the welfare of people and Bihar.