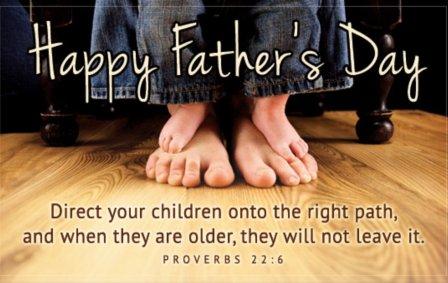 Someone sent me a photograph via WhatsApp this Sunday  morning from the tiny  parish of Sikandra in the Jamui District of Bihar. The Church of St. Francis Xavier hosted a Fathers’ Day event, where the Dads who came to church, whether in their 20s or their 80s were felicitated and handed flowers.

Along with today being the feast of the Holy Trinity, it is also Father’s day in India. And if we turn the pages of history, we can find out that the original Fathers’ Day celebrations were around St.Joseph, the adoptive father of Jesus. In India, the secular aspects of the day began getting attention, thanks to commercialization and globalization, and so it is observed on the third Sunday of June.

The first celebration of Father’s Day goes back all the way to 1508 in Catholic Europe, and it was brought to the Americas by the Portuguese and Spanish. It wasn’t until the 20th Century that the event was celebrated outside Catholic traditions in the US.

In Brazil, Father’s Day falls on the second Sunday of August and this day was chosen in honour of Saint Joachim, the patron saint of fathers. According to Catholic, Anglican and Orthodox traditions, Joachim was the father of Mary, the mother of Jesus.

Father’s Day varies from country to country. In Canada, the United Kingdom, and the United States it is celebrated on the third Sunday of June.

The appreciation of fatherhood dates back to at least 1508, when history’s first mention appeared in Southern European tradition.

Roses are the official flower of Father’s Day, with people previously wearing them to church on this date. While this tradition is rarely seen today, sons and daughters used to wear either a red rose in admiration of a living father or a white rose in memory of a deceased father.

Reflection on Father’s  Day, from a Catholic Perspetive

We celebrate Father’s Day on Sunday, June 16, 2019. We think of the strength of a father, his guiding hand, his wisdom, his help.

It’s a day when Catholics are encouraged to remember the fatherhood of God, who serves as a role model. God the Father gave up his only Son, Jesus Christ, to show us a new path, to suffer and die, so that we might be saved through him.

He provides an example of the very vocation of fatherhood. Fathers are to sacrifice their lives for their families.

How does the Church look at the vocation of fatherhood? Fathers perform their rightful roles by:

• Being the spiritual leader and guardian of their families.

• Praying for and with their families.

• Being a courageous witness to the Gospel.

• Providing care and support for their families.

• Serving as an example of goodness and truth.

• Leading with courage and accountability.

• And, if it really gets tough, then a father will not hesitate to Lay down his life for another.

Today, in a special way, let us be grateful for:

• Our fathers, by birth or adoption, who love us and support us through life.

• Our Church leaders, who take on the paternal role of guiding us through life.

• And God our Father, who will always teach justly and grant us boundless mercy.

It is also observed on the same date in Qatar, Argentina, France, Greece, India, Ireland, Mexico, Pakistan, Singapore, and Venezuela.

In Germany, Father’s Day is marked 40 days after Easter, while Australia and New Zealand celebrate it on the first day of September.

Russia continues the Soviet tradition of celebrating “Man’s Day” on Defender of the Fatherland Day – February 23 – which marks the first mass draft into the Red Army.

In Thailand, Father’s Day is on December 5 – the birthday of late King Bhumibol, who is considered the father of the nation.

China celebrates Father’s Day on August 8 – the eighth day of the eighth month – because the word for eight in Chinese is “ba” and the term for father is “ba-ba”.

Egypt, Jordan, Kosovo, Lebanon, Syria and the United Arab Emirates mark the celebration on June 21, coinciding with the summer solstice, while in Brazil fathers are honoured on the second Sunday of August, in honour of Saint Joachim, the patron saint of fathers.

Fathers’ Day is basically being driven by commercial interests world wide, and while it is definitely a positive thing to thank your dad for being there, it’s appalling how every merchant tries to convince you that we need to buy something to make the day special for your father.