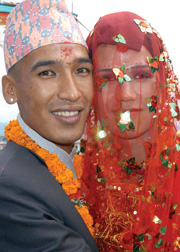 Nepal is the among least developed countries in the world, with about one-quarter of its population living below poverty line whereas two-thirds of its population dependent on agriculture, but there’s more to it than meets the eye, says Shradha Chettry in this essay.

The Federal Democratic Republic of Nepal, rests in the lap of the Himalayas. Famous for its scenic beauty and greenery with a population of 30 million which is equivalent to 0.39% of the total world population. Nepal ranks 49th in the list of countries by population.

Nepal has eight out of ten highest mountains including Mount Everest, the tallest in the world (also known as Sagarmatha in Nepal). Nepal is a tremendous centre of attraction for mountaineers, rock climbers and  nature lovers. The country’s life style, culture, hospitality and ever welcoming nature of the locals are  attract tourists . Nepal’s economy is heavily dependent on aid and tourism.

Though economically poor, according to the ‘worldwide voyagers’, Nepal is the wealthiest nation on the planet in terms of nature tourism. Apart from its natural beauty, Nepal is also known for some of the holiest Hindu temples in the world. Spiritual tourism and pilgrimage destinations are scattered all over the nation. Birth place of Lord Buddha and Goddess Sita are well-known Buddhist and Hindu pilgrimage sites.

Apart from scenic spots and pilgrimage tourism,  Water resources are abundant throughout the country because of which Nepal has huge potential for hydro power development and is rich in terms of water water resource availability. Water is one of the most important natural resources in the country.

India is an important neighbour of Nepal and it occupies special significance in foreign policy because of the geographic, historic, cultural and economic linkages. It lies in a zone which is ecologically fragile and sensitive and is prone to earthquakes, floods causing massive destruction of human lives and assets, whereby it remains the biggest recipient of India’s humanitarian assistance. Nepal shares borders with 5 Indian States like Bihar, Uttarakhand, West Bengal, Uttar Pradesh and Sikkim which makes it an important point of cultural and economic exchange.

India is Nepal’s largest trade partner and the largest source of foreign investments. The two countries not only share open border and unhindered movement of people, but also have close bonds through familial ties popularly known as ‘Roti-Beti ka Rishta’.

Apart from the familial ties, there are many Nepalese men who are serving in Indian as well as British army as part of the Gurkha Regiment. The Gurkhas are generally known for their bravery and have fought many wars and won many military decorations.

Nepal is a highly patriarchal country and in spite having a larger ratio of females  in population, women are treated worse off than men in every measure. However, the country aspires to become a middle income country and attain the sustainable development goals by 2030.

Shradha Chhetry is currently in her third year studying communicative English with Media Studies. She is based in Patna.