Hoo Ha about plants, what about animals?

By SXC intern on August 8, 2019Comments Off on Hoo Ha about plants, what about animals? 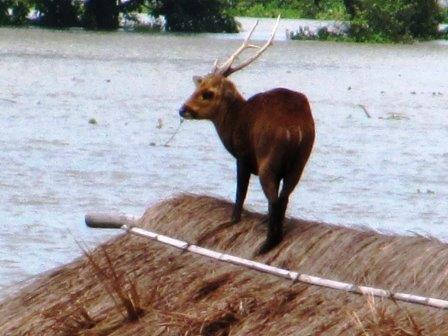 We have only one Earth so we need to take care of it. The 9th August is observed as Bihar Earth Day and thus Bihar Deputy Chief Minister Sushil Modi said that plantation of at least five saplings, provided by the forest department, would be done in every school on the day.

Many states like Arunachal Pradesh, Madhya Pradesh and Bihar have taken a step ahead in protection of Mother Earth by starting plantation programs.

However it is an appreciable step by state governments but do only trees contribute to ecological balance? Since the beginning of medical science, scientists have learned a lot about how our bodies function by studying other animals in the nature.

By studying other animals, we have also learned how we as human beings have evolved in the shape that we are in today.

Animals play important roles in the ecosystem. All animals and plants in the ecosystem co-exist and balance each other out. Thus our Earth has found a system that works flawlessly which has perfected over time through trials and errors. So why do we limit ourselves to think about only plants? Many animals, insects and microorganisms are working in silence to keep this Earth going on.

Talking about animals, their conditions are not good but pathetic. Look around the city streets to find hungry stray animals. Look around , can we spot animals whose wounds are taken care of by any organization which works for animal interest.?They are only few and most of them do not rescue such animals in need.

In total there are 20 care centers for Dogs and 7 care centers for other stray animals. Isn’t it saddening that none of them rescue animals even if they are informed about any injured animal? In Saket Vihar colony of Anisabad Area, some two days ago two dogs were hit by cars at different places. Today morning some sewer cleaners saw the bodies and then threw them away in an empty plot otherwise the bodies would have been there for some more days.

The Sanjay Gandhi Biological Park, commonly known as Patna Zoo has recently signed an agreement with Discovery Communications India (DCIN) to spread awareness among schoolchildren about conservation of animals. How? The awareness will be spread by showing schoolchildren movies and documentaries related to the animals in a new built “3D Theater-cum-Zoo Interpretation Center”. Patna has about 103 private schools and about 24 government schools. Only government schools regularly make a visit to Patna Zoo or different parks of Patna with their students. So the rest of the school going children will be deprived of this knowledge. Thus it turns out to be a very impractical step even if the intention was really to spread awareness.

Instead, it would have benefited greatly if a separate shelter home was built for stray dogs and cows.

The Forest Department celebrates the Forest Festival with government and non-governmental organizations and meanwhile many endangered and banned birds are being sold from Bhagalpur to Navagachiya without any fear and self-conscience.

Near Ulta-Pul and Ghantaghar in Bhagalpur, many migrant birds like scaly breasted Lonchura, Parrots, Eagle, Owl, Baya-weaver, Indian-roller, Heron, Grey francolin and Shikra are being sold. The forest department and other organizations become blind as soon as these cases are exposed. Perhaps these are small matters for them and will not affect us in any way.

Most plant fruits are unable to develop without pollination taking place and many beautiful flower varieties would die out if not pollinated. Bees and insects are the most common pollinators, but bats and birds are known to do their share in this vital activity. Hummingbirds, spiderhunters, sunbirds, honeycreepers and honeyeaters are the most common pollinator bird species.

In Australia, Dingo (Canis dingo) can suppress populations of introduced predators such as red foxes and in doing so they can benefit smaller native prey. In some regions, dogs and their keen noses have been trained to help scientists find threatened species such as Tiger Quolls. Elsewhere they are helping to flush out and control Feral Cats.

Thus we need to see a broader aspect to conserve and protect our Earth. It can be seen as when one saves A resource and is extensively consuming resource B then it is of no use. If we really intent to protect our Mother Earth we need to protect every living and non living entities that contribute towards smooth running of it.