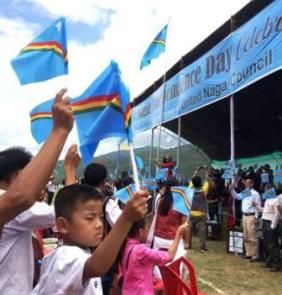 IMPHAL, Aug 14 – Various civil society organisations today celebrated the 73rd ‘Manipur Independence Day’, remembering the historic day on which the British left the then kingdom of Manipur, marking the end of the colonial rule.

Various functions were held at several levels by the civil society organisations, commemorating the day by hoisting the flag of the then kingdom of Manipur.

At a function held at the Sana Konung (royal palace) in Imphal, the titular king of Manipur, Leishemba Sanajaoba, unfurled the flag of Manipur. The event was organised by the Coalition For Indigenes’ Rights Campaign (CIRCA).

Speaking on the occasion, the titular king remembered the historic event of freedom of the then Manipur kingdom from the British colonial rule and said that celebration of the day should not be viewed as anti-India. “We are celebrating the day only to remember the historic event so that the future generations are aware of it,” he said.

The titular king added that after keeping Manipur under its rule from 1891, the British freed Manipur on the intervening night of August 14 and 15, 1947, and the Manipur national flag was hoisted at 7.10 am on August 15.

The titular king urged the civil society organisations celebrating the historic event not to create confusion among the people by hoisting different flags, while stressing the need for an in-depth research on the flag which was hoisted on that historic day.

In the key note address, CIRCA general secretary Moirangthem Angamba expressed the importance of knowing the history of Manipur while celebrating the Independence Day.

He pointed out that the politics played on the internal conflict hindered the establishment of geo-political and socio-cultural activity in Manipur history.

“Manipur should have a political status with internal autonomy despite being a part of Indian Union,” he said and added that the root cause of the crisis that the people of Manipur were facing today was the Merger Agreement of 1949.

“Celebrating our Independence Day is a way to open the eyes of the people and let them know that we were once an independent nation.

After British rule granted independence, the dominion of India and Manipur of that time were two independent political entities.

Even under British rule, Manipur existed as a protected state till 1947, he claimed and added all the princely states under British India and British provinces, even after British left, should have the entity of an independent state according to various internal laws and treaties.

The biggest celebration was held in Senapati district of Manipur where for the first time the ‘Naga National Flag’ was hoisted during a public event organised under the aegis of United Naga Council (UNC), the apex body of the Nagas.

Hundreds of Naga from different places including neighbouring states of Nagaland and Myanmar attended the Independence Day celebration held at Katomei public ground hosted by the Naga People’s Organisation (NPO) under the theme “One Goal, One Destiny”.

The celebration started with hosting of the ‘Naga National Flag’ by the special guest of the event, Neingulo Krome, secretary-general Naga People’s Movement for Human Rights (NPMHR), followed by speeches from the leaders of Naga civil bodies, and singing of ‘Naga National Anthem’.

Leaders of all the 20 Naga tribes of Manipur, all the Naga Frontal Organisations, Naga women groups, Naga student bodies attended the event.

On August 14, 1947, certain Naga rebel declared today as their national Independence day and since then the Nagas, scattered across the region including Myanmar, have been celebrating this day. However, the celebration this time witnessed significant participation from the public.

Neingulo Krome has attributed the large public participation due to the prevailing situation in Kashmir, which according to him has triggered a sense of wariness of the government’s policy.

“The celebration this time is historic. There has never been a public event of such a large scale in the past except in small pockets. People coming out in large numbers in support of the Naga movement and to celebrate the historic day is a clear message that people are fed up of the unpredictable policies of the government”, said the NPMHR general secretary.

“We are very happy to celebrate the 73rd Naga Independence and to show our support to the ongoing peace talk. It is our long-cherished dream to live under one administrative umbrella. We are very honoured to be here in Senapati and to take part in the celebration which was made this day possible by our forefathers”, said Nokpai Konyak, who led a team of Myanmar Naga students to attend the celebration all the way from Myanmar.

The celebration ended with the final football match ‘Independent Cup’ between Ukhrul and Chandel districts.

Meanwhile, the celebration was also reportedly held in other parts of the Naga dominated districts marking the event by hoisting the ‘Naga National Flag’.