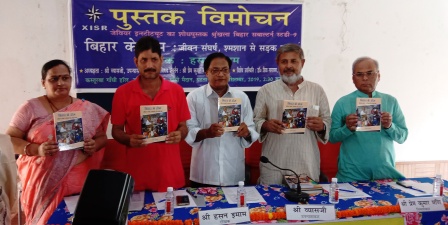 Only a bibliophile understands what book means to them. A program of book launch was organized by Xavier’s Institute of Social Research in Gandhi Sangrahalay ,Patna for the launch of the book “Bihar Ke Dom: Jeevan Sangharsh, Shamshaan se Sadak tak” by Hasan Imam.

“We are living in 21st century and we still believe in different kinds of stereotypes and untouchability. In Hindu religion, we believe that firing a dead body could only be done by a ‘Dom’ then only the soul gets heaven, and on the other hand outside the cemetery we treat them as untouchables.

The Chief guest of the program Mr. Vyasji(novelist and scholar)  and Shree Prem Kumar Mani (literary critic) also shared their views regarding the book and said that this custom of untouchability is present from years in our society and we the common people are also as much responsible as the government and no one knows when it will end.

He said, “This research institute has been established in Bihar on September 10th 2007 and has been aiming at creating an interface between scholars, academics and activists and initiating a process of social awakening”. He added that there are more than 15000 books and one can do study and buy also.