Demand for umbrellas, raincoats and waterproof slippers springs up 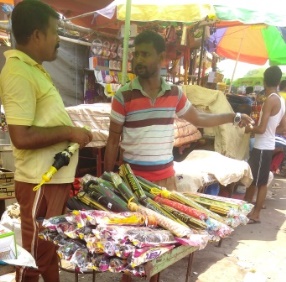 With the end of rainy season, the heavy rain has given boost to the demand for umbrellas, raincoats, waterproof slippers and sandals.

Raman Kumar, a shopkeeper on Boring Road said “Earlier, I used to sell only three to four umbrellas a day. Most of my customers were women, who would buy umbrellas to protect themselves from the scorching heat. Now, I am selling approximately 25 umbrellas and raincoats every day”.

Bhola Prasad, a retail shop owner at Anisabad, said, “Colourful umbrellas are in demand among women and girls and plain ones among men. We also have small umbrellas for kids.”

Besides, the demand for waterproof slippers has also shot up, affecting the sale of other footwear.

Sudhanshu Jaiswal, a footwear shopkeeper on Ashiana Mor said, “Waterproof slippers for women are available in the range of Rs 130 to Rs 329. Men’s slippers are priced anywhere between Rs 160 and Rs 329. Customers prefer simple water-resistant slippers to fancy ones.”

34-year-old Manish Pratap Singh had already bought a raincoat in anticipation of rain. He said, “Yes, this time rain has been delayed but at least in the month of September it has rained. So, I had already purchased a raincoat, which I carry to office everyday.”

Hanuman Nagar resident Rupa Mishra said, “I got new raincoats for my kids and an umbrella for myself. I don’t want them to get wet and fall sick.”

Anita Singh, resident of Rajiv Nagar who loves the rainy season, has bought a colourful umbrella with flowers on it. She said, “I need to buy a pair of waterproof slippers as well.”