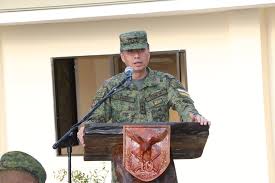 The Philippines’ new military chief has warned media not to present “biased” news reporting on the country’s communist insurgency. Journalists responded by suggesting that threatening them wasn’t part of his job description.

Armed forces chief, Lt. Gen. Noel Clement, said media should be “factual” in their reporting so as not to be construed as rebel supporters.

“Just be factual and do not be biased,” he said, adding that there are times when alleged violations committed by state forces are highlighted more than those committed by the rebels.

“If that happens, there is a tendency for us to look at the [media] personalities involved favoring the enemy,” Clement added.

He questioned the Philippine media’s coverage of Jose Maria Sison, exiled founding chairman of the Communist Party of the Philippines.

“Why are we giving airtime to a person like [Sison] who is here to destroy our country,” said Clement. “Why do we even have to listen to him?”

Sison, who has lived in exile in The Netherlands since the 1980s, has warned that human rights violations by the military are going to be worse under Clement’s watch. Media groups criticized Clement’s statement, saying that it is not the military chief’s job to dictate to journalists.

“It is not in Clement’s job description to tell us to rid our reports of biases because, in the first place, we believe that good journalism is biased toward truth and relevance,” read a statement from the People’s Alternative Media Network.

Network chairman, Luis Teodoro, said Clement was “way out of line dictating who journalists may or may not interview.”

“Speaking of truth, it is not even true that Filipino journalists in general purposefully highlight rights violations by the [military]. It just happens that violations are indeed perpetrated by them,” said Teodoro, a university professor of journalism.

The professor said the armed forces’ chief “may do well to disabuse soldiers of the thought that red-baiting is an effective way of endearing the military to media workers.”

“It is exactly the opposite,” said Teodoro.

President Rodrigo Duterte has given orders to the military to end it “as soon as possible.”

“The president gave me one … order and that’s to finish the insurgency problem,” said Clement, who assumed leadership of the 148,000-strong military early this week.

Military estimates say the communist-led New People’s Army has about 3,500 armed guerrillas throughout the country.