Vasai Archbishop says dialogue, not reaction is the response to VHP 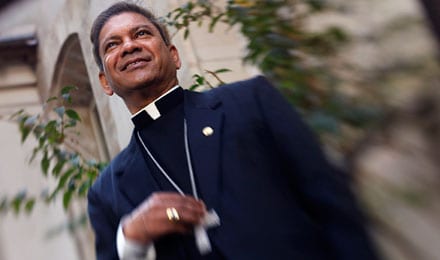 ROME – Archbishop Felix Machado of Vasai has urged Christians and the church to engage in ‘dialogue’ with right-wing political and religious forces in India. Watching what’s happening in his country today, Machado believes the need for real conversation with the Hindu majority is more urgent than ever. Speaking to a newspaper in Rome, Archbishop Machado said :

“The key word in dialogue is ‘listening’, allowing the other person to speak and really listening,” Machado said, explaining how he believes a dialogue with Hindu nationalist forces could work.

“Listening is very important in this conversion controversy, because often these people have the impression they haven’t been heard,” Machado said.

Machado believes Christians have to try to understand what’s driving the campaign, in order to engage it successfully.

“We have to be very attentive to listen to what they’re objecting to,” he said. “I think many things will be revealed in the course of our conversation if we listen to them sympathetically.”

Machado understands the psychology and worldview of the hardline nationalists better than most, given that his own family is mixed between Hindus and Christians and one of his cousins, with whom he’s still close, was among the founders of the BJP.

“Even the best of my Hindu friends are now objecting to conversions,” he said. “They think the word ‘conversion’ only means that somebody is being forced to become something they don’t want to be.”

To date, Machado believes, Indian Christianity too often has been on the defensive in the face of such charges.

“Many of us Christians have just been reacting to these words and deeds, driven by the euphoria of certain parties who politicize religion coming to power,” he said. “They’re doing things that are very alarming for us, and we’re reacting to that.”

Machado believes Christianity in India still has the social capital to make such a dialogue possible.

“Everybody recognizes what we’ve done for the poor, the downtrodden, the marginalized and forgotten,” he said. “All this has been admired, as has our educational contribution. We’re trying to make everybody a real citizen who uses his reason and makes progress.”

Some of that reputation, he believes, risks being squandered if Christians don’t find a more effective way of engaging the logic that’s behind the country’s current hardline trend.

“Our reaction has been misunderstood,” he said. “They think we’re trying to defend something, and we haven’t taken dialogue seriously as the Second Vatican Council taught us to.”

“Today, we need to go into areas that are touchy for us,” Machado said. “The dignity of these Hindus has been hurt in the past, and we have to respect the dignity of every human being.”

Who is Felix Machado?

For almost a decade under St. John Paul II and Pope Benedict XVI, Monsignor Felix Machado was a primary architect of the Vatican’s inter-religious outreach, including putting together a star-studded 2002 summit of religious leaders in Assisi as a follow-up to John Paul’s historic, and deeply controversial, first such gathering in 1986.

Machado, born in Vasai, India, outside what was then Bombay, served as under-secretary of the Vatican’s Pontifical Council for Interreligious Dialogue from 1999 to 2008. There he worked shoulder to shoulder with Michael Fitzgerald, the British prelate.

Together Fitzgerald and Machado designed that 2002 event, which featured rabbis, muftis, shamans and sages all hopping aboard a rarely-used Vatican train – quickly dubbed the “Peace Train” by the media, in a belated tribute to Cat Stevens – for a quick ride to Assisi to talk, reflect and “pray in the same space,” if not quite “together.”

Given that background, it’s probably not surprising what answer Machado, now the Archbishop of Vasai, gives to rising tensions in India today over accusations that Christians engage in forced conversions of Hindu natives.

“Dialogue,” Machado said. “We have to dialogue with these people.”

Machado was in Rome for the regular ad limina visits bishops are required to make every five years.

Prior to his Vatican run, Machado studied philosophy at the Catholic University of Lyon and spent seven years living in the ecumenical community of Taizé in France, during which time he spent a year as a volunteer in a refugee camp in Bangladesh. Later he earned a master’s degree in theology at Maryknoll in New York and a doctorate from Fordham.

Given his history, he’s seen as among the most theologically and ecclesiastically literate of the Indian bishops, and he’s a frequent point of reference for both the local media and also political and cultural leaders.

Since the 2014 rise to power of Prime Minister Narendra Modi and the BJP party, India’s small Christian minority has faced growing pressures over alleged forced conversions, including the adoption of anti-conversion laws in seven states and a proposal to make such ordinances national. Indian authorities in some jurisdictions have also reportedly begun asking foreign-funded non-profits to sign affidavits vowing not to engage in religious conversions.

Recently, a priest in the eastern state of Jharkhand claimed he almost died in prison after being jailed for an alleged forced conversion. He said he experienced a medical crisis behind bars, but his jailers refused requests to take him to a nearby hospital for treatment.

These pressures on Christians, which also affect Muslims and other religious minorities, are part of what observers describe as a broad program for the “saffronization” of India under Modi, meaning an attempt to impose Hindu values and identity while squeezing out rival faiths. According to those observers, Modi’s decisive re-election victory last May has emboldened the effort, especially in BJP-controlled regions of the country.

“But it’s useless just to react,” Machado said. “We’re such a minority as Christians in India, hardly 2.5 percent. We’ve got to move from reaction to dialogue.”

Machado was clear that dialogue doesn’t mean capitulation. He told the story of once challenging the late Prime Minister of India, Atal Bihari Vajpayee, who was also a founder of the BJP, to name a single specific case of forced conversion to Christianity in the country on his watch.

“If you have one case, then tell me,” Machado recalls saying. “Don’t just generalize.”

Machado said that while he can’t absolutely guarantee forced conversion never happens anywhere in such a vast and sprawling country, in his own diocese tremendous safeguards are taken to be sure every person entering the Church is doing so voluntarily.

Even with such measures in place, Machado said, the Vasai archdiocese still gets about 1,000 adult converts a year, mostly from traditionally marginalized tribal groups.

“I love my Christian faith very much, so when someone is going to become a Christian, my heart rejoices,” Machado said.

At the same time, he said, there’s a history of coercion, sometimes subtle and sometimes not, by religious groups, which lends today’s concern over forced conversion an air of legitimacy.

“The ball is in our court as Christians,” he said. “We have to give our partner every guarantee that I’m not doing what you think I’m doing.”

“That’s the point of dialogue,” he said, “and I don’t see that we have another choice.”