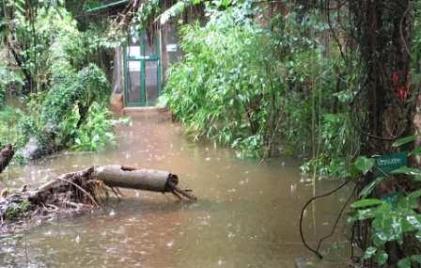 Battered by heavy rainfall for the past 48 hours in 3 districts of Bihar, at least 29 people have died in the state due to mishaps caused by the downpour, according to news agency ANI.

Parts of the city experienced a break in the rainfall for a few hours,and very low precipitation on Monday. That raised the people’s hopes that there may be a respite. However, there have also been reports of water levels creeping upwards in some parts of the city.

The state capital Patna continued to be among the worst affected with four-to six-feet-deep waterlogging in several areas Monday. Deputy Chief Minister Sushil Modi, who was stranded at his Patna residence, had to be rescued by NDRF.

Officials say the state capital has not witnessed such waterlogging since the 1975 floods. The Bihar government has also asked two helicopters from Air Force for lifting and airdropping food packets and medicines. The Patna district administration has ordered the closure of all schools till Tuesday.

“The situation is unprecedented,it’s almost like a cloud burst. Impact is mainly due to water logging. Out of 19 NDRF teams deployed, 5 are in Patna. We’ve evacuated about 4,000 citizens since morning,” SN Pradhan, DG of National Disaster Response Force (NDRF) said on Patna floods.

NDRF and SDRF are conducting relief operations in low-lying areas of the state capital. The water-logging has severely affected one of Patna’s leading government hospitals, Nalanda Medical College and Hospital (NMCH).

“People are facing difficulties due to water-logging here. We are distributing the relief material to people. Five teams of NDRF have been deployed in Rajendra Nagar and Kankarbagh areas of Patna,” Kumar Balchand, Deputy Commandant, NDRF was quoted as saying by news agency ANI.

Several trains and flights have been cancelled, rescheduled or diverted owing to the situation.

Go Air offered a fee waiver. “Due to the bad weather conditions and the unfavourable situation in Patna, we are providing a full fee waiver on rescheduling/cancellation for all flights to/from Patna. Reach out to us on Twitter, FB or call us at 18602100999 for assistance,” the airlines said in a tweet.

The Patliputra Colony area, Digha, Rajendra nagar, and Hathwa market side appear to be the most affected. Several houses  are flooded with four to five feet of water.

At St. Mary’s Church premises in  Chakaram, displaced neighbours were afforded accommodation on one of the higher floors and meals were served to them, it was learnt.

Patna Women’s College is also facing two to three feet water on its lower floors it is reliably learnt.

Students of St Xavier’s College , even though their college is flood affected, are braving the odds to collect relief for some of the families in urgent need.

The Taru Mitra Bio reserve is also flooded, and so is the entrance to the Holy family Hospital in Kurji. .

‘Politician blames it on the stars’

As the flood situation worsened in Bihar, Union minister Ashwini Choubey, known for his strange outpourings, on Monday said it was a “natural calamity” and blamed a particular constellation for the heavy downpour.

“The downpour, which has been lashing Bihar for the past few days, is because of the Hathiya Nakshatra (constellation), during which sometimes there is a very heavy rainfall. The rains have now taken the form of a natural disaster,” Choubey was quoted as saying by news agency PTI.

The fake news brigade circulated a video of a crocodile apparently swimming through flooded Patna, this was debunked by Alt news as an old video from Gujarat.

MEANWHILE Congress leader Rahul Gandhi on Monday said the situation due to the Bihar floods had gone out of hand and appealed to the party workers to immediately join the relief-and-rescue efforts to help the affected people.