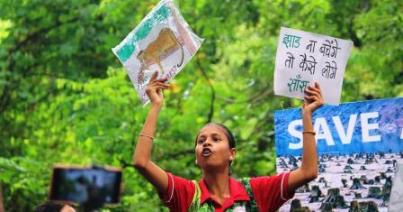 Mumbai’s ‘lungs’ are being amputated for a shiny new metro railway. People are unhappy, protesting, but ‘development’ steamrolls on.

And, oh boy, do these sluggish Mumbai  Municipal Corporation wallahs work fast! They began felling trees in Mumbai’s Aarey forest on Friday evening, hours after getting a go-ahead from the Bombay High Court, according to local reports. The trees are being felled to build a metro car shed. Under cover of darkness, bulldozers were brought in to knock down the trees.

:ate yesterday night, several activists were detained after they attempted to stop the BMC workers from felling the trees. Police also used force to stop protestors who were arriving at the site in large numbers. Several protestors camped outside Arrey overnight, as policemen prevented them from marching on. Local reports say about 27 activists were detained at Dahihar police station.

Earlier yesterday (October 4), the court had dismissed a batch of petitions challenging the Brihanmumbai Municipal Corporation’s decision to allow the cutting of 2,646 trees in Aarey forest, which lies in the northern part of the city.

The BMC swung into immediate action, so that trees can be felled and  the forest decimated before activists can file an appeal to the Supreme Court, observers say.

Last month, the government had told the court that the area cannot be given the status of a forest, (even though it is inhabited by Adivasis (indigenous people) who have lived in harmony with the forest for centuries.)

Environmentalists call Aarey – with its nearly four lakh trees, lakes, gardens and cattle farms spread across 3,160 acres – Mumbai’s last green lung. The forest is also home to 27 Adivasi villages or padas whose residents are now uncertain about their fate.

Some activists claimed on Twitter that the trees were being felled illegally as an order to do so needs to be uploaded by a government website 15 days in advance. However, the Mumbai metro authority tweeted a link to such an order, which is dated September 13.

Nearly 300 people gathered at the site to stop the authorities, Mumbai Mirror reported.

There have been protests in the last few weeks against the civic body’s decision to cut the trees on 30 hectares of Aarey land to build the metro car depot. The Mumbai Metro Rail Corporation Limited, which implements the metro project, had promised to compensate by planting thrice as many saplings elsewhere, but protestors had demanded that the car shed be shifted to another site.

One of the pleas dismissed by High Court Chief Justice Pradeep Nandrajog and Justice Bharti Dangre challenged the August 29 resolution of the civic body’s Tree Authority to cut the trees. It was filed by environmentalist Zoru Bhathena. The second petition was filed by non-governmental organisation Vanashakti, which urged the court to declare more than 1,000 hectares of Aarey Colony an “ecologically sensitive zone” under the Indian Forest Act.

Last month, protestors had camped outside actor Amitabh Bachchan’s bungalow in the city’s Juhu locality after Bachchan tweeted in support of the metro project. The police even detained 22 students, who protested under the banner of Vidhyarthi Bharatiya Sanghatana. They carried posters calling for saving the Aarey forest.

In 2017, activists Amrita Bhattacharya and Biju Augustine petitioned the Bombay High Court to challenge the Maharashtra government’s decision to change the land use of 33 hectares of Aarey land from a “no development zone” to “Metro 3 car shed”. The Court dismissed the petition claiming that Aarey land has not been officially designated as a forest.

Following this, in September 2018, the National Green Tribunal dismissed a petition by environment rights organisation Vanashakti and the Aarey Conservation Group, asking for Aarey to be officially designated as a forest and, therefore, a no-construction zone. The Tribunal claimed it did not have jurisdiction over the matter. As of September 15, as reported in some sections of the media, both petitions were before the Supreme Court.