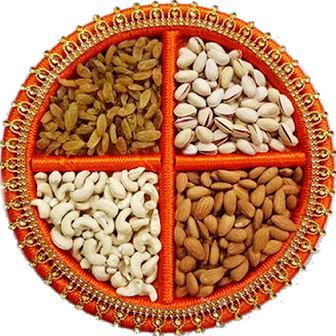 With the coming of Diwali festival the price of dry fruits become dearer as the demand of them increases many folds. According to economic times, it is estimated that the business of dry fruits would cross 100-125 crore.

Deeraj, a customer said “as the quality of sweets during the festival decreases people tend to push themselves to buy dry fruits instead of sweets for the healthier option.”

Another customer, Ramesh said “The vendors also pack these dry fruits in such a way that customer get attracted towards it and these gifts pack costs between Rs. 450-2500”. “For the sake of health, customers are ready to spend more and more and this increases the price”, said a vendor.

A businessman, Kamlesh from Patna City, said “with the increase in import duty on dry fruits, the price in the local market has increased.” The dry fruit market largely depends on import – almonds and pistachio from Iran, the US and Turkey; walnut from Chile and the US; Cashew and raisins from Afghanistan and Africa. Import of dates, almonds and walnuts from Afghanistan are routed through Pakistan. And also the California’s almond and walnut have to cross the Attari-Wagah border. Following the Pulwama attack, India raised duty on Pakistan goods and the situation worsened since Pakistan stopped all border trade with India after the revoking of Article 370 by the government.

Importers from all over India said that they suffered heavy losses as several consignments were stranded midway after India slapped 200% duty on imports from Pakistan and also the imports were stalked completely since Pakistan suspended trade.

Rahim, a dry fruit businessman from Bakerganj said “dry dates are imported from Pakistan and since import has been affected so is the sale. With limited amount of dry date in local market, the demand is on rise, so, I have to sell them at higher price.

Rajan, an importer said, “If the consignments of dry fruits routed through Dubai or by air, it will increase the cost further.”

It is said by the importers that the price would keep on rising further in the festive weeks once the existing stock of retailers get depleted.