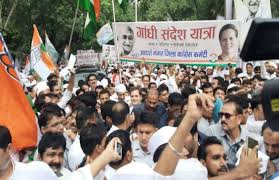 Prime Minister Narendra Modi Wednesday paid homage to Mahatma Gandhi at Rajghat on his 150th birth anniversary and urged people to implement Gandhian principles in their daily lives. The prime minister said the nation expresses its gratitude to Gandhi for his everlasting contribution to humanity. E

“We pledge to continue working hard to realise his dreams and create a better planet,” Modi wrote on Twitter. Gandhi Ji’s commitment to peace, harmony and brotherhood remained unwavering. He envisioned a world where the poorest of the poor are empowered. His ideals are our guiding light. #Gandhi150

In an opinion piece in The New York Times, titled ‘Why India and the World Need Gandhi’, Modi quoted Bapu as saying, “It is impossible for one to be internationalist without being a nationalist. Internationalism is possible only when nationalism becomes a fact, i.e., when peoples belonging to different countries have organized themselves and are able to act as one man.”

In a short video on Gandhi, Modi said his message of peace is still relevant to the world community. The prime minister also referred to the seven perversions Gandhi had cautioned people about. These are: wealth without work, pleasure without conscience, knowledge without character, visit without ethics, science without humanity, religion without sacrifice and politics without principles.

Addressing party workers and leaders at the Rajghat on the occasion of 150th birth anniversary of Mahatma Gandhi, Congress leader Sonia Gandhi said India and Gandhi are synonymous with each other, but there are few people who want RSS to be synonymous with India.

“How will those who consider themselves supreme understand the sacrifices of Mahatma Gandhi… Those doing politics of falsehood will not understand Gandhi’s philosophy of non-violence,” Sonia Gandhi said in her brief address on the occasion.