On Thursday, Giving Thanks for century of service to Bihar 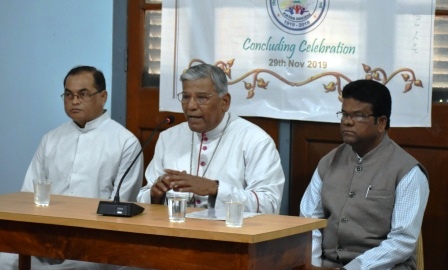 Patna 27 November: The Patna Diocese of the Catholic Church in Patna is celebrating 100 years of service to Bihar, and the many achievements and contributions in education, health, and social service could not have been possible without the goodwill of all the communities of Bihar, said Archbishop William D’Souza SJ.

Archbishop William D’Souza SJ, while addressing a press conference on the occasion said that even though the Catholic Church has a presence in Bihar from the 17th Century, Patna was made into a diocese in 1919 by the then Pope Benedict fifteenth.

Some 35 bishops and archbishops from across India, especially Cardinal Oswald Gracias who is the head of the Catholic Bishops Conference in India and the Chief Guest on the occasion will be present.

Earlier in the day, at 10 AM there will be a special Holy Mass which will be offered at ST. Michael’s grounds, where an estimated 6000 Catholics are expected to gather and thank God for his grace and blessings.

Present at the conference were Vicar General of Patna Archdiocese Fr Prem Prakash, and Education Director of the Archdiocese Fr Joseph Raj, who is also the Convenor of the Centenary Celebrations.

The contribution of the Catholic Church is visible in the education and health sector, where the Missionary schools and missionary hospitals are well known. His Grace, William D’souza  said that the centenary was not just about looking backwards, but also about going forwards. There will be a release of a pastoral plan that focuses on how we can better improve the quality of education as well as the health services. ‘Our goal is not to set up expensive schools or super-specialty hospitals, but to make good education and good healthcare affordable for the ordinary people.”

In response to a question, His Grace said that he did not want to dwell on the problems that the Church is facing, rather to focus on the good things and positives that have been done in the past years. There is no doubt that it is because of  the wholehearted cooperation, collaboration and affection of the vast majority of non-Christian brothers and sisters, the good work that has been achieved. All Catholic institutions have a significant number of staff and collaborators from different faiths and communities, working together to bring peace and harmony to our beloved State, said Archbishop D’Souza.