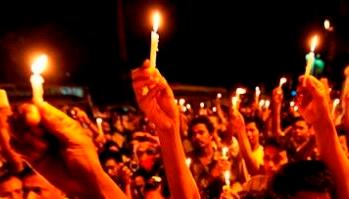 Delhi, January 8: Hundreds sat before of the Jama Masjid in Delhi with candles and posters in a peacweful protest against the amended citizenship law, NRC and the National Population Register.

Residents from all parts of Old Delhi —Lal Kuan, Gali Kasim, Bhuja Pandi and Ajmeri Gate – participated in the protest. They also expressed solidarity with the students of the JNU and the Jamia Millia Islamia.

Children participated in the candle march that started from Lal Kuan, passed through Chawri Bazaar and ended at Gate No. 1 of the Jama Masjid in Old Delhi where the crowd sat on the stairs of the mosque and shouted slogans.

On the proposed nationwide National Register of Citizens (NRC), Zeena Junaid (39) said they have their documents with them, but wondered what about those who do not have documents.

“Where will our brothers and sisters from Sikh, Muslim, Hindu and other communities go if they fail to submit their documents?” she asked.

Seeda, also a resident of Lal Kuan, said why there had been no action against any culprit involved in assaulting students on campus.

Seeda alleged that the present government was not only attacking students, but were also creating communal disharmony in the country.

The protesters said they would not be sharing any details with the officials who would visit to verify their documents regarding the amended Citizenship Act.

“Boycott CAA” and “Can’t protect students in your own country and want to protect minorities of other countries” were among some of the posters held by the protesters. They also held banners mentioning the Preamble.

The protesters also questioned why no arrests had been made yet in connection with mob attack at the Jawaharlal Nehru University.

“There is an atmosphere of fear in the country under this government. No one can speak or share their views on the decisions taken by the government. We are not safe in our own country,” said a student who did not wished to be named.

Iram, an M.A. student of Jamia Milla Islamia said she fears going to campus after her university students were attacked by the police last month.

“I was not part of the protest when police barged in my campus but following the incident, I also joined the peaceful protest which was organised post the violence that unfolded in our university,” she said.

A student of Delhi university, who did not wished to be named, said: “Instead of providing us employment opportunities and a safe campus to pursue our dreams, government is sending their goons and assaulting students. Are they shaping our future or destroying it?”

The symbolic protest concluded with the singing of the national anthem.