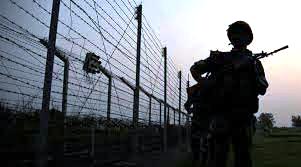 India is erecting a new non-cut steel fence to plug vulnerable and infiltration-prone patches along its sensitive border with Pakistan and Bangladesh.

The officials said, the single row fence, with loops of concertina wires on top is being erected at a 60km border stretch near Amritsar in Punjab.

A pilot project of this new fence is also being tested at a 7-Km stretch in Assam’s Silchar along India’s border with Bangladesh and is being analyzed by the BSF, they said.

This fence will cost about ₹2 Crore for a Kilometre, an official added.

Based on the feedback of these projects, new fence will be erected at more places where either the old one has worn out or there was no fence owing to geographical challenges.

Deployment of smart fences, advanced surveillance gadgets and anti-infiltration alarms has been speeded up by the border management division under the Ministry of Home Affairs (MHA) and Border Security Force along these two borders, they said, as per local news.

These developments are being seen in the backdrop of developments where security agencies have detected the presence of ‘Afghan fighters’ along the India-Pakistan border.

These terror operatives have travelled across borders from Afghanistan resulting in an enhanced vigil by the security forces to thwart infiltration and terror bids along the sensitive frontier in Jammu-Kashmir.

Sources said that while infiltration bases and terror launch pads along the International Border (IB) in Jammu and Line of Control (LoC) in Kashmir are still intact, the latest concern of the security agencies are the well-trained terrorists from Afghanistan whose presence along the vulnerable infiltration spots along Pakistan border can be used to stimulate trouble in the newly-created Union Territory of Jammu-Kashmir and other locations in the neighborhood.

The BSF, they said, have also recently completed and exercise to fully “map and identify” vulnerable spots all along these two borders as part of a three-staged exercise carried out last year.

Latest measures include strengthening Indian defences along Pakistan, mapping of infiltration prone areas along the two borders, and erection of new steel fence along vulnerable patches, the sources said. According to an assessment, they said, the security agencies are also keeping a close tab on the activities of cross-border terror modules and terrorists as they anticipate some incidents of attack on security forces deployed in the Kashmir valley and around the Jammu area.

Officials also refused withdrawal of more paramilitary units from Kashmir saying some “optimum” strength of these forces like CRPF, BSF, ITBP and SSB need to be kept there for regular law and order and counter-terrorist operations. About a lakh Central Armed Police Forces personnel were sent to Kashmir in the wake of scrapping of Article 370 provisions last year and the Centre has withdrawn about 100 companies (about 100 troops in each company) in the recent past stating the security situation was “conducive” for such a de-induction.