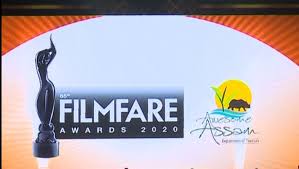 GUWAHATI: – Registering a strong protest against the Citizenship (Amendment) Act (CAA), a number of leading artistes and intellectuals of Assam have asserted that the time is not right to hold a mega event like Filmfare Awards function in the State, report local media.

Political observers say that the proposed event, to be held for the first time in Assam, is a ploy of  the BJP led government to distract the youth from the key political issues that are engaging the state.

Addressing a press conference on Tuesday (Jan 28), the artistes stated that the initiative of the BJP-led State government to organize the Filmfare Awards function at such a time is an attempt to stop the mass movement against the Act. They also questioned the justification in the State government spending Rs 30 crore to organize what is essentially an awards show run by a private Media house.

Speaking at the press conference, senior advocate Arup Borbora urged ‘every section of the people’ to boycott the event as the State has been going through a very tough period.

Noted filmmaker Jahnu Barua also made a statement over phone during the press conference. He criticised the State government for spending a huge amount of public money on the event being organised by a private organisation.

“A few days ago, we went through a massive protest against the Act. Even today, the mass movement is under way. So, it’s not the right time to organise such a mega event in the State,” actor Ravi Sarma said at the press conference.

He added that events like Filmfare Awards function will not be beneficial for the people of Assam. The function will also not play any role in enhancing the Assamese film industry in future, he said.

Criticising the State government, actress Zerifa Wahid said, “The government said that through the awards function, they are going to promote the Assamese tourism industry. But, in Assam, the tourism industry still lacks proper infrastructure. So, the State will not benefit from the event.”

She said the event would not provide adequate space for the artistes of Assam to showcase the State’s cultural elements. She also urged all public organisations, including AASU and AJYCP, to raise their voice against the event.

Guwahati is hosting the award show as part of the State government’s initiative to use Bollywood’s influence to promote Assam tourism at the national and international levels. The event is likely to be held in the second week of February.