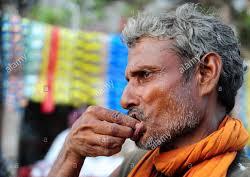 Bihar Health minister Mangal Pandey stated that 1,75 crore people from Bihar use  chew some form of  tobacco, despite the Bihar government’s steps to discourage the practice.

Speaking at a national consultation on ‘Effective Implementation of Measures for Control of Smokeless Tobacco Use in India’ jointly organised by the health department and the National Institute of Cancer Prevention And Research (NICPR) here on Tuesday, the minister said  that the government had taken several measures in the last few years to control the production and distribution of tobacco products in Bihar.

What’s ‘smokeless’ tobacco? well, it’s a ‘modern term’ for khaini, gutka, paan masala and other forms of chewing tobacco that people put in their mouths.

“In May 2012, Bihar banned  gutka and pan masala manufacture (with tobacco and nicotine). In September 2016, the state banned the sale of gutka in twin packs and in October 2018, we put a ban on use of food or food additives as ingredients in chewing tobacco,” Pandey said.

The minister added, “Last year, the health department banned the manufacture, storage, transportation and sale of 15 brands of pan masala after toxic chemicals (magnesium carbonate and nicotine) were found in them by the National Tobacco Testing Laboratories and National Institute of Cancer Prevention and Research under the Ministry of Health and Family Welfare. We have to work together to control smokeless tobacco use in Bihar.”

The minister released the fact sheet of the state – ‘Smokeless Tobacco Control: Bihar Experience’ on the occasion.

Principal secretary (health) Sanjay Kumar claimed that all pan masalas came from other states as their production was banned in Bihar. “Use of smokeless tobacco has become a major concern for the nation, especially the developing states,” he said.

Deepak Mishra, executive director of the Socio Economic and Educational Development Society, and NICPR director Shalini Singh were  present at the event.