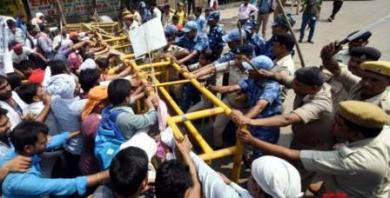 3.5 contractual teachers are on strike in Bihar, Some 400 of them have been suspended and arrested.

Over 400 contractual schoolteachers in Bihar, who were on strike, have been suspended and FIRs have been registered against several of them for “indiscipline” and for not joining the ongoing evaluation of answer sheets for the Class 12 examinations.

The quality and delivery of basic education by the state of Bihar remains woefully unsatisfactory. Thousands of state run primary and middle schools have to deal with teacher absenteeism and poor quality teaching. On top of that, these ‘teachers’ are always up in arms about some issue or the other. The ongoing unrest is about salaries and service  conditions.

Over 3.5 lakh contractual schoolteachers in the State have been on strike since February 17 demanding pay parity with permanent teachers. As many as 178 teachers in Begusarai district, 122 in Kaimur and 118 in Gopalganj district were suspended, the district education officers of Gopalganj and Begusarai said.

In Patna too, FIRs have been lodged against several teachers.

The irony is that the majority of the students who are appearing for the state board examinations come from government schools, whose parents are ‘ordinary’ people with no social or political clout. The strike will further fuel shoddy evaluation of examination answer sheets, and delay the publication of results. “What better time for the teachers to try to blackmail the government? And do you think that the Nitish government will just back down?’ quips Shyamal Dhar, a parent, adding, “who cares about the real state of human resource development in Bihar?

Teachers are adamant, in no mood to relent

The teachers said they would not end their strike. “Until now no official from the government has approached us to discuss our demand … Until our demands are met, we will not return to work … It’s better to starve to death while on strike than resume duty now,” said some teachers in Patna.

According to media reports, Bihar Education Minister, Krishnandan Prasad Verma, blamed the striking teachers’ refusal to end the strike despite the chief minister asking teachers to focus on teaching and assuring them of salary increase just two days ago. He said the government would not tolerate any “indiscipline” to deprive education to students and would take “appropriate” action against striking teachers. He, however, denied that the strike had affected teaching in schools.

The strike call has been given by the Bihar Rajya Shikshak Sangharsh Samanvay Samiti, a joint platform of 26 school teacher associations.

Angry Samiti leaders said government “cannot force us to end strike by taking action against us. All contractual teachers are on strike and they will continue till demands are fulfilled. We are not afraid of actions and threats”.

The leaders also threatened to intensify their agitation if the government did not withdraw the dismissal order of two striking teachers. “Teachers have a democratic right to protest and the government cannot snatch our rights,” they said.

According to Samiti leaders, teachers were not just unhappy but also angry with Nitish Kumar for “deliberately ignoring” their demands of salary at par with permanent teachers in various state government schools.

“We have been raising our demands – equal pay for equal work – for several years but the government has been using different measures to suppress our voices,”  a  Samiti leader was quoted as saying