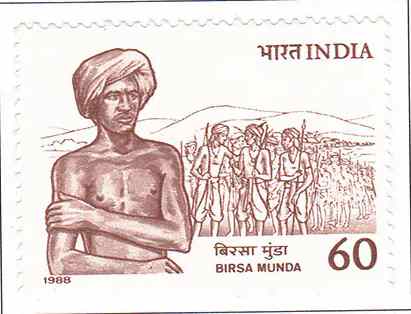 Birsa Munda was a freedom fighter, but he did not fight against the British. He fought against the feudal system which was introduced by the British government in India. He was a folk hero and a religious leader. He was born in the Bengal Presidency of the British government on November 15, 1875.
The state of Jharkhand was created on his birth anniversary in 2000, in recognition of his impact on the national’s movement.

Much part of Birsa’s childhood was spent in moving from one village to another with his parents. He was a member of the Munda tribe of the Chhotanagpur plateau. In order to join the German Missionary school, Birsa had to convert to Christianity. However, he opted out of the school after few years. The way Birsa related to religion later in life was similar to Christianity.

It has been more than a century since he died, but his legacy still continues in Jharkhand, Bihar and parts of Odisha and Karnataka. His work mobilized the tribal people to fight for their rights.
Several structures, institutions, and bodies in India have been named after Birsa Munda. Films like Gandhi se pahle Gandhi and Ulgulan- Ek Kranti have depicted his life.
Birsa died in Ranchi at a young age of 25 on June 9, 1900. Birsa Munda is known to have mobilized the tribal community against the British. He was also successful in persuading the colonial authorities to pass laws regarding the security of the land of the tribal people. He lived a short life and the movement died soon after his death, still his efforts were successful.
He has managed to carve out a place for himself in the folk literature, mass media, and academia.