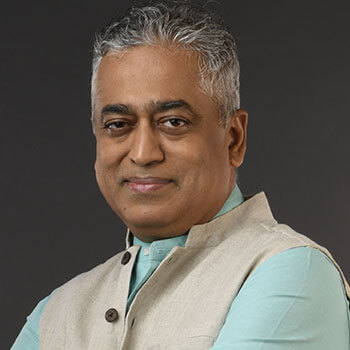 In a significant appeal to those who mentor the upcoming generation of journalists, news anchor, multimedia journalist and author Rajdeep Sardesai spoke of the importance of teaching media ethics as part of the journalism course.

Journalism has changed dramatically over the past 30 years, and in the ‘age of mobile journalism’ youngsters looking at a career in journalism have a plethora of options. However, journalists, like other professionals have to learn to embrace a changing world, he said.

Sardesai, who was awarded the Padma Shree in 2008, spoke of his ‘personal connect with the Jesuits and St. Xavier’s Colleges over the country’, during a ‘Success 360’ webinar series organised by the National Service Scheme unit of St Xavier’s College of Management and Technology Patna on Saturday.

In this context, he mentioned his pleasure at addressing the students of St Xavier’s Patna, a politically significant city, in Bihar that has had a significant role in the democratic journey of the nation.

Sardesai was born in Ahmedabad to a Goan father and a Gujarati mother.His father, Dilip Sardesai, was an Indian Test cricketer and his mother, Nandini, an activist in Mumbai and former head of the Department of Sociology at St. Xavier’s College, Mumbai. He completed his schooling up to ICSE from the Campion School, Mumbai, and did two years of ISC at The Cathedral & John Connon School, Mumbai. Thereafter he graduated in economics from the St. Xavier’s College, Mumbai. He then went to University College, Oxford, earning the degrees of Master of Arts, and Bachelor of Laws.

While at Oxford he made six first-class cricket appearances for Oxford University and one for a combined Oxford and Cambridge side against the 1987 Pakistani touring team. He was awarded a cricket Blue at Oxford.

In an age of citizen journalism, while the face of journalism has changed, quality appears to have fallen. It appears like ‘a race to the bottom’, as news channels appear to be engaged in a ‘fierce battle for eyeballs’ in order, not to provide information, but to ‘keep the viewers hooked’.

In an engaging interaction with the Xaverian community and students, Mr Sardesai touched upon his own experiences : his early realization that he wasn’t cut out to be a cricketer and so he opted for a Law degree from Oxford; his stint as a young journalist in the Times of India [where the great RK Laxman told him: ‘every day is a new day, every cartoon is my first cartoon’] and his experiences with Prannoy Roy and NDTV, the pioneering Indian 24 hour news channel. “Prannoy told me that the channel was a beast that needed to be fed constantly,” he said.

In a 30 minute talk that was an eye-opening critique on the state of journalism in India today, he said that the ‘breaking news concept’ had broken down. he advised media students to understand that being a journalist was not about ‘just trying your hand at journalism’, but real journalism requires a different kind of passion, and the resolve to ‘speak truth to power’. For the journalist, every day is a new learning experience, he said. He advised students that the new age journalism is a digital profession which requires multi-faceted abilities and a multi-lingual skill, as journalists need to communicate in different mediums in a fast changing world.

“You are a lucky but impatient generation, but it’s always better to climb step by step. Like two cricketers, Vijay Kamble who took the elevator and became an instant celebrity, but also took the fast lift into oblivion, and Sachin, who climbed up step by step, and stayed on top for a long time.” there are no short cuts beyond a point, he stressed.

Rajdeep Sardesai also touched upon the importance of media and journalism courses teaching ethics to the students. “Journalism is not Public relations, and journalists should stay true to the values they believe in. A person is only responsible to his or her own conscience, he said.
.

Earlier, In his welcome address, the principal of St Xavier’s college of Management and Technology commended the Mr Sardesai on his sterling contribution to Indian journalism, and his steadfast adherence to the principles that further the secular and democratic fabric of the country at a time when the media ‘seems to align itself for fringe benefits of money or power’.