We Stand with Stan 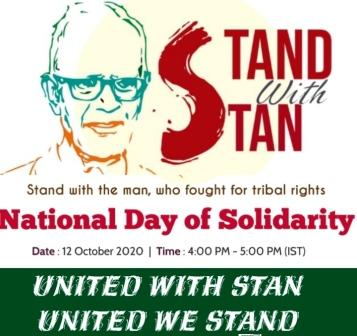 From New Delhi to the North East, and From the Bangalore to Patna, hundreds of well-meaning, saddened, shocked and indignant protesters stood up for the arbitrary arrest of an 83 year old Jesuit who has spent most of his life to bring social justice to the tribal communities of Jharkhand.

At  around 4 in the afternoon, a chain of protests erupted all over India, demanding the release of  Fr Stan Swamy, a Jesuit priest and human rights activist from Jharkhand.

Many social and human rights organizations staged a protest rally in Patna on Monday, October 12, 2020 to express solidarity with  Fr. Stan Swamy SJ, who was recently arrested by the  National Investigation Agency (NIA) from his residence in Ranchi.

In Patna, the state capital of Bihar, there was a gathering of close to a hundred people, who  waved posters and chanted for the release of priest, who was legally ‘abducted’ by the NIA, the National Investigation Agency on what is widely believed to be trumped up charges.

The protesters said Fr. Swamy, who belonged to the Jamshedpur Jesuit Province, was arrested from his residence in Ranchi and taken to Mumbai for questioning in connection with the Bhima Koregaon incident near Pune on December 31, 2017. They said Fr. Stan, a human rights defender had been at Bagaicha, a Jesuit-run Social Action Centre in Ranchi, for the past 15 years, primarily working protection of Adivasis’ rights as enshrined in the Constitution of India.

One noticed several well known citizens and activists under the masks: Padmashree Sudha Verghese, Noted journalist and PUCL activist Nivedita Jha, Members and associates of the Bihar Dalit Vikas Society, professors from some of the leading colleges in the city, students, and members from the local adivasi community as well.

UPDATE… received from our sources

Stan is in the hospital inside the Taloja prison, following Covid-19 mandatory procedures. Supreme Court on 23 March, barred any visitors to the prison. So, no one can visit Fr. Stan. Fr. Stan and others are allowed to call up people who they want to speak to, but the call is restricted to one or two calls per week. This must be pre-booked with jail authorities. Let us hope that we get some news about Stan in a couple of days. Appropriate petitions will be moved in the HC. We are waiting to receive copy of the chargesheet. This might take a week or so, as it is running into 10,000 pages.

Catholic Archbishop William D’Souza of Patna released the following statement of solidarity with the incarcerated priest.

We have learnt that people from different walks of life are observing today as a ‘National Solidarity Day’ in support of Fr. Stan Swamy and all the other human rights defenders. We stand in full solidarity with all the people who have come out in support of Fr. Stan Swamy following his arrest by the National Investigation Agency (NIA), accusing him of being related to Bhima – Koregaon incident.

We are saddened to learn that the NIA arrested the octogenarian Fr. Stan, who suffers from many ailments, on 08 October 2020 from his Ranchi residence without even serving him a warrant. We are shocked to learn that Fr. Stan who served the Adivasis of Jharkand all his life has been charge sheeted.

We are absolutely convinced of his total and lifelong commitment to the rights of Adivasis in the state of Jharkhand through research, documentation, writing, and legal aid. He highlighted the untold sufferings and violations of rights of adivasis by various forces including government policies. Fr. Stan had stated:

I have identified myself with the adivasi people and their struggle for a life of dignity and self-respect. As a writer, I have tried to analyse the different issues they face. In this process, I have clearly expressed my dissent over several policies and laws enacted by the government in the light of the Indian constitution. I have questioned the validity, legality and justness of several steps taken by the government and the ruling class

We are fully convinced that his life and work have been in full conformity with the letter and spirit of the constitution of our country, law of the land, and the noble values of non-violence and selfless love contained in all the religious traditions and preached by Lord Gautam Budha, Mahatama Gandhi, and myriads of great leaders of our country.

The 83 year old Fr. Stan consistently and fully cooperated with the investigating agency. Fr. Stan has categorically denied any link with extremists’ leftist forces and disowned the extracts allegedly taken from his laptop. We suspect that his arrest is motivated for his firm stand in favour of the rights of adivasis.

We make a strong appeal to the concerned authorities for the safe, unconditional and immediate release of Fr. Stan. We appeal to Shri. Nitish Kumar, our honourable Chief Minister, Shri. Sushil Kumar Modi, our honourable Deputy Chief Minister, and all the leaders from the state to demand that Fr. Stan Swamy and other human rights defenders are not unjustly and falsely implicated and that the rights, privileges and duties of all the citizens are duly safeguarded. Protection and promotion of dignity and rights of every citizen is the foundation of our beloved country.

We pledge our renewed commitment to protect and promote the dignity and rights of the poor through our life long selfless service and commitment. We thank all the fellow citizens from our state Bihar who are in solidarity with Fr. Stan and other human rights defenders. Together we stand in Solidarity in taking our country forward.

A Silent Human Chain was held, inspite of pouring rain  on the  12th October from 4:00 p.m. to 5:00 p.m. It stretched from from Brigade Road to Shantinagar Bus Depot. This was part of a National Call on this issue.

The Bangalore Jesuit Educational Institutions (BJES)Bangalore, India, expressed deep anguish and sorrow on the illegal arrest of Fr. Stan Swamy SJ from his residence in Jharkhand by the National Investigation Agency falsely accusing him in relation to Bhim- Koregan Incident.

Fr. Stan Swamy is 83 years old and a Jesuit Priest, he has spent almost 3 decades of his life identifying himself with the Adivasi people and their struggle, especially focusing on their land rights. He stood and supported the life, dignity and the self-respect of the adivasi community.  Fr. Stan has defended the injustice done to the traditional forest-dwellers and the adivasi so that they can have their land, and develop themselves economically.

The NIA has falsely accused and implicated Fr. Stan to stall the judicial process to give justice to the innocent Adivasi people in the region.  It is important to note that Fr. Stan has always cooperated with the investigating agencies and has always provided detailed statements, claiming to be innocent in this case. Fr Stan has expressed his dissent with several policies and law enacted by the Government in the light of the Constitution of India.

It is beyond comprehension that the NIA has arrested Fr. Stan 83 who has other ailments during this pandemic which could pose a great risk to the health and well-being of this Human Right Defender and Champion of the People.

We recognized with gratitude the many people of the country from all walks of life who have joined us in expressing their solidarity with Fr. Stan. We demand the Fr. Stan will be released immediately.

My heart beats for Fr Stan says, Medha Patkar addressing the protest at Jantar Mantar: “He worked for Atmanirbhar Adivasi.”

Meanwhile the Catholic Bishops’ Conference of India (CBCI) expressed its deep sorrow and anguish on the arrest of Fr Stan Swamy from his residence by the National Investigation Agency (NIA), accusing him of being related to the Bhima –Koregaon incident.

In a statement, CBCI General Secretary Archbishop Felix Machado said:  “It is difficult to comprehend the plight of an octogenarian with several morbidities, like Fr Stan Swamy to have to undergo such difficulties during this pandemic in which even a normal healthy person would hesitate to travel or would never travel risking one’s life.

” The CBCI makes a strong appeal to the concerned authorities to immediately release Fr Stan Swamy and to permit him to go to his residence. The Catholic Community has always been lauded by all as body of loyal, law abiding and service minded citizens of Mother India. The community has always been contributing to nation building and continues to collaborate with the government in working for the common good of all Indians and the progress of our nation. We earnestly urge that the rights, duties and privileges of all citizens are duly safeguarded, and peace and harmony prevail among all.”

Jharkhand Chief Minister Hemant Soren on Friday, October 9th questioned the motives of  the Modi government over the arrest of Stan Swamy, asking why was it insistent on crushing every voice of dissent.

“What message does the Bharatiya Janata Party government at the Centre want to give by arresting 83-year-old Stan Swamy who voiced the concerns of the poor, the deprived, the Adivasis?” the chief minister asked in a tweet. “Why this stubborn insistence on crushing every voice of dissent?”

Two MPS from Meghalaya, Vincent Pala and Wanwerloi Kharluki have written to Prime Minister Narendra Modi, stating that ‘Many Christians among our community are being framed in cases where they are actually not involved, and the best example is Father Stan….’ [ see letter alonside]

“An Ecumenical Stand in protest was held today at Guwahati, the gateway to the North East to demand the release of Stan Swamy and all Intellectuals and Activists who have been arrested for standing with the poor as and marginalised. The presences of Heads and representatives of all Major Churches at this time of uncertainty sent out a very positive message and strengthened our solidarity”, reports Allen Brooks, Former Chairperson and Member, Minority Commission, Assam..

Intellectuals, editors, politicians from the Northeast also had a virtual meeting that attracted over a hundred participants to express their solidarity with Fr Stan and other human rights activists who appear to be arbitrarily implicated by the law enforcement agencies, in what is being seen in liberal circles as an effort to intimidate those who speak up.