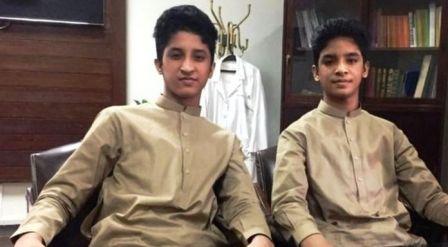 An unusual case has come to light in Pakistan. Two sisters living there have become brothers after undergoing a sex change operation. Both of them belong to a Zamindar family of Punjab based in Pakistan.

“I have reached Gujarat as a boy from Islamabad. I am so happy about this that I cannot put it in words. I did not like girls’ clothes from childhood. My work and habits were like boys. I have seven sisters, and they are very happy to have two brothers now. My brother Abid is also happy.”

This is what Waleed Abid said, a second year student of Sonbari village of Gujarat district in Punjab province of Pakistan said, after going through a successful sex reassignment surgery.

Before the sex change operation, his name was Bushra Abid, while his younger brother Murad Abid, a student of class IX, was Wafia Abid before the operation.

‘This case was different’ for the doctors

Waleed and Murad’s parents were married in 1993. After marriage, nine daughters were born to him one after the other. However, after the sex change operation of two sisters, they now have seven daughters and two sons. Waleed is fifth among the sisters and Murad is at number six.

The sex change operation of both the sisters was done by a team of 12 doctors at the Children’s Hospital of Pakistan Institute of Medical Sciences, Islamabad under the leadership of Dr. Amjad Choudhary.

In an Interview, Dr Amjad Choudhary said that he has done sex operations before, but this case was different because he had not operated on two sisters or  brothers simultaneously. Both the brothers were undergoing treatment for almost two years.

Dr. Choudhary also said, “We have operated on both of them separately. Waleed Abid’s operation was done on September 20, after which he was kept in the ICU of the hospital. When we were fully satisfied of the success of the operation, then we operated on Murad Abid on October 10.”

According to Dr Amjad, these operations lasted for six hours, in which many doctors were involved from time to time. Both the brothers have been allowed to return home from the hospital on October 21.

According to Dr Junaid of Ayub Teaching Hospital, Abbottabad, the gender of some children is not clear at birth. The reason for this is that the genitals of such children do not take a completely clear shape. There are chances for such children to suffer from a condition called ‘atypical genetics’. However very few people are born with this condition about 0.5 to 0.7 percent of people.

He said that the condition is usually congenital and the condition is a blockage in the way of specific organs and sexual development. In  this case, physically both were girls, but they didn’t have any of the characteristics of girls or women.

Doctor Amjad said that even after being of a certain age, both of them had not started menstruation. The children’s  mother got them  examined in Gujarat, from there the cases were  referred to PIMS Children’s Hospital.

He said that initial tests revealed that both were suffering from ‘atypical genetics’ and needed a gender change operation. With this operation, the genitals were surgically brought back to normal position.

Doctor Amjad Chaudhary told that he has done many surgeries even before this operation and many people are living a good life after the operation. But he says that the decision to get the operation done is 100% the patient’s own.

He said, “Even in this case, we had given ample opportunity to both of them to decide. They talked about almost every subject. Our psychiatrist also spoke to them.

It is important when parents feel that their children’s anatomy, genitalia and their behaviour are different, then they should immediately consult a doctor.

[By Nishant Mishra, based on a report on BBC Hindi Service]