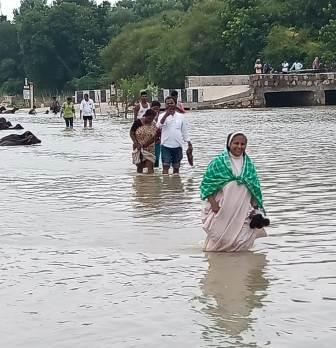 As Bihar, India’s third largest state, reels under the twin misfortunes of post covid-19 instability and the onslaught of floods caused by heavy monsoons, the Christian communities and the laity, religious congregations and social action centres in Patna Archdiocese are on a relentless mission of relief to the affected.

According to conservative estimates, 53 persons have died and 2 million people, spread across 1652 villages in 83 blocks of 16 districts, have been affected by this year’s floods. Over 219,000 people have been evacuated or rescued.

According to Bihar government’s disaster management department’s data, a rough estimation suggested that standing crops on more than 400,000 hectares of land were inundated.

The poorest of the poor are often the greatest sufferers, losing the little they had to the flood waters.

Earlier in the month, the religious sisters of the Apostolic Carmel congregation responded to a distress call from Nadiya Tola in Bariyarpur, some 155 kilometres from Patna. They waded through waist deep water to reach out to about 100 poor families in distress.

“The common misconception is that the very poor were hardly affected by the covid-19, as they supposedly have developed so called ‘herd immunity’,” a social worker told Newsnet. “What is hidden behind the news hole is the fact that literally thousands of bread earners have lost their employment, and the stress and distress of the daily wage earners and working classes hasn’t magically disappeared after the unlock period. Adding to the woes is the flooding in various areas of the state. The poor in their thatched huts and shanties are in dire distress.”

The Patna archdiocese, that recently marked a centenary of existence, is primarily a ‘poor church’ with meagre resources, in a state that is among the most underdeveloped in India. A sizeable number of the faithful are from the working class, many are from Dalit backgrounds, some within the Christian community identify as lower middle class. Even so, inspired by the Christian spirit, the members of this poor church reach out to help all in need, not just Christians.

Seva Kendra in Patna is the hub of several initiatives, and coordinates relief work throughout the Patna Archdiocese.

With the help of Caritas India, over 325 families in Jamalpur block also received essential supplies.

Earlier in the month, Mr Alfred D’Rozario, a well known member and community leader of the tiny Anglo-Indian community in the state, donated an ambulance to the social service centre. The affordable ambulance service  is a vital life support system for the diocese, especially as the commercial medical transport rates have risen steeply since the second wave of the covid-19 pandemic.

The lockdown and resultant loss of jobs have heightened post Covid economic distress in many parts of Bihar, and the Patna Archdiocese has been in the forefront, providing relief to over 10,000 families specially from the most distressed and marginalized sections in the past two months alone.

One Response to "Patna Archdiocese Floods relief to the Distressed"