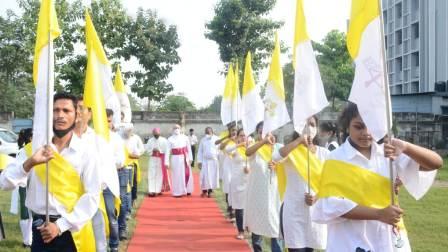 Apostolic Nuncio to India Archbishop Leopoldo Girelli was given a rousing welcome during his first visit to The Queen of Apostles Parish in the Kurji locality of Patna, the largest parish in Patna Archdiocese.

A special escort of honour escorted the car carrying the Papal Nuncio from the Seva Kendra complex to the Queen of Apostles’ Church.

The papal Nuncio celebrated the Mission Sunday Mass among an enthusiastic congregation, who had earlier given him a rousing welcome.

A day earlier, on Saturday, 23rd October, Achbishop Girelli conferred the Pallium on the Metropolitan Archbishop of Patna, Sebastian Kallupura at the St. Joseph’s pro-Cathedral.

The Bishops from all the dioceses of Bihar were present at the ceremony.

Made of wool with a 14-inch strip hanging down the front and back, the pallium signifies the sheep the archbishop symbolically carries, as Christ the Good Shepherd did.

It is worn over Mass vestments and symbolizes an archbishop’s unity with the pope and his authority and responsibility to care for the flock the pope entrusted to him.

Pope Francis modified the ritual of conferring the pallium in January 2015: The pallian is blessed on the feast of Saints Peter and Paul in Saint Peter’s Basilica; the metropolitan archbishops, receive those pallia in a separate ceremony within their home dioceses from the hands of the Apostolic Nuncio (who is the personal representative of the pope in their respective countries).

Archbishop Emeritus Willaim D’Souza explained the significance of the Pallium to the congregation.

In his address, Archbishop Leopoldo Girelli  said that Patna Archdiocese had over the years ‘established itself as a church for the poor. He noted with appreciation the ‘touching gesture that during the pandemic 84 priests gave up a part of their monthly allowance to help the poor’.

Later, addressing the parishioners and youth of the Kurji parish during a reception after Mission Sunday mass, the Nuncio said, “Our duty as Catholics is to spread God’s love, and we should be generous in loving our neighbours.”

Patna Archdiocese has a population of about 60,000 Catholics spread over Bihar. Christians are about 0.2 percent of the population of the state.