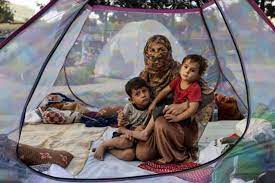 “The Church is having to learn to operate much as the early Church in the book of Acts — under the continual threat of persecution,”  says Release International CEO Paul Robinson. UK based Release International supports Christians around the world who have been forced to flee because of their faith.

Christians in Afghanistan have been fleeing the cities to escape the Taliban, according to partners of Release International. Many Christians who remain are trapped inside the country, unable to leave through sealed borders.

The organisation, in a press release, expressed  concern about false reporting of persecution under the Taliban, which is obscuring the real hardship faced by the Afghan Christians who remain.

It said fake news on social media have presented images from Iraq of Isis atrocities, and of a protest in Colombia, claimed to have been filmed in Afghanistan. Even a 2009 rumour of missionaries about to be executed in Iraq has been amplified and applied to Afghanistan.

“This is why we talk to partners who are working directly with the underground church,”  saysPaul Robinson

Release International partners with SAT-7 Pars, which broadcasts programmes via satellite TV into Afghanistan. Adds Paul Robinson: ‘SAT-7 is hearing directly from its audience about what is happening in that country.’

The executive director of SAT-7 Pars, Panayiotis Keenan, told Release International: “Since the Taliban has taken over, we are receiving many messages from Afghanistan that the persecution is getting harder.

“Afghan Christians are contacting us on a daily basis, describing how difficult the situation is. They are hiding and meeting in secret locations. But winter is coming and that will soon become more and more difficult.”

Though many Christians managed to leave ahead of the Taliban advance, there are still several thousand in Afghanistan. Even if they wanted to leave, they could not. There is nowhere for them to go. The borders are controlled by the Taliban and they are unable to fly out of the country.

“Increasing numbers of Christians around the world are having to flee in the face of extremism,” says Release International CEO Paul Robinson. “We are pleased to see the UK government is prioritising Afghan refugees who are facing persecution. Let us continue to do all we can as a country to support those who have been uprooted from their homes because of their faith. They need our welcome and support.”

There has been a huge exodus of Christians from the Middle East since the rise of Isis in Iraq and the spread of Islamist terrorism around the region. Jihadist groups are also gaining ground in Africa, attacking churches and Christian communities in Nigeria and the Sahel.

Pakistan and Iran are the natural escape routes for Afghans fleeing their country. But officially, the Pakistan border is closed to refugees from Afghanistan, and both Pakistan and Iran say they have reached their limit of refugees and asylum seekers. Meanwhile, Turkey has redoubled its efforts to build a wall to keep out refugees from Iran. The UK has pledged to take 20,000 Afghan refugees, with priority given to women, children and those facing persecution. At the same time, the UK government is pressing ahead with a Nationalities and Borders Bill which some, including the UN, claim could criminalize refugees taking unauthorised routes into the UK. That would include refugees from Afghanistan.

Even before the Taliban takeover, Afghanistan was one of the most hostile countries to be a Christian. “The one good thing we can say about this is that the underground Church is increasingly well-equipped to weather the storm,” says Paul Robinson. “The Church is invisible and is has already learned how to operate underground.”

Release International has been partnering with a range of Christian organisations to provide broadcasts to encourage and equip believers in Afghanistan, including refugees who have now fled to neighbouring countries. These partners are also producing Christian literature and digital discipleship material.

“Support and encouragement through the airwaves, whether by radio, satellite television or social media, has never been more needed than it is today,” he says.