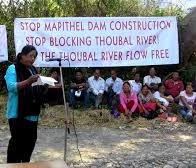 Imphal: The rising water level in the Mapithel dam, which has already submerged crops and roads threatens to swallow the Chadong village in Ukhrul district, fear the villagers.

One villager, Rebika Kasum observed, “The water will reach our dwellings soon. The road, including the only bridge that connects Chadong with other villages, is submerged. “The water level rises by around two feet every day. Our farms are flooded. Where shall we go? What do we eat next year?” she asked.

The people of Chadong blqme the Mapithel dam, which they say, has blocked water flow from the Thoubal since January 15. Now monsoon rains have swelled the water level alarmingly.

In desperation, they brought two boats from Moirang in Bishnupur district to use for transport. “As we live in the hills, we have no experience of boating. A few of us trained at Moirang try to assist people in ferrying over the flooded area,” said a local youth. The villagers also use a bamboo raft.

“If we require emergency healthcare, we are in trouble. So far, no government official has visited the affected site,” said another resident. Chadong has 212 families and a total population of 1,027 according to the 2011 census.

The Mapithel dam, also known as the Thoubal Multipurpose Project, was implemented at Phungyar division over the Thoubal river in Ukhrul district. It aims to irrigate 21,862 hectares of land, provide 10 million gallons of drinking water and produce 7.5MW power. The construction of the dam began in 1989 amid protests from people in the areas likely to be affected by the dam.

The villages, NGOs and civil society organisations opposed  construction of the dam since it would submerge forest and agricultural land, violating environment policies.

The Chadong village authority signed an agreement with the state government in 1993. The government assured them that it would provide compensation to the affected people by 1996 but failed to give the amount. Later, 157 households refused the money.

In 2003, the Mapithel Dam Affected Village Organisation was formed and it launched an agitation to demand a fresh agreement with the government. A review committee was subsequently formed by the government but failed to bring any resolution.

The National Green Tribunal had halted construction of the project because it did not have the necessary forest clearance from the Union ministry of environment and forests. The first stage was cleared by the ministry in 2010.

A case is pending in Manipur High Court in connection with the second stage clearance.

A Chadong resident said, “The government provided a location on the hill slope to build houses. How can we construct houses when we don’t have building material?”

The United Committee, Manipur, has appealed to the state government to stop the dam’s functioning.

[by intern Debratta Choudhary based on media sources]