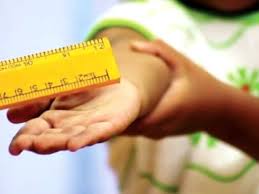 Imphal: In today’s new regime of ‘mollycoddling’ students, it is not unusual for pampered parents to call for the head of a teacher, if he happens takes his belt to the behind of a belligerent boy. ‘Corporal punishment’ in schools has been outlawed, no matter if some of the brats lounging on the school benches show scant respect for the rules.

Teachers who take matters (or sticks) into their own hands and attempt to tap them vigorously across the outstretched palms of their pupils are living dangerously, as one Gurumayum Rupachandra Sharma, a computer science teacher of St. Joseph’s school. Sharma whacked Satyam Mayengbam, a student of Class VI for misbehaviour. Satyam’s parents informed a student body called Democratic Students Alliance Manipur (Desam) about the punishment, saying he was hit on his hand with a stick 41 times.

Sharma was summoned by Desam to its office and interrogated. He was charged with not abiding by the ethics of a teacher. The volunteers then thrashed the teacher. The teacher’s calf and thigh bore marks of thrashing with a stick.

Teachers and students of St Joseph’s School protested against the assault on the teacher. So were they defending the right of the teacher to crack them over the knuckles once in a while? “We condemn the assault on our teacher for punishing his student. Parents send their children to school with confidence that they would be taken care of,” a student holding a placard said.

“We are protesting the assault on Gurumayum Rupachandra Sharma, by volunteers of Desam for beating Satyam Mayengbam, a student of Class VI for misbehaviour. Instead of informing the principal, the parents went to Desam,” a teacher said.

The school management later released a notice stating it would take suitable action against the teacher.

Parents and representatives of the student organisation came to the school to negotiate while the protest was going on at the school gate. Desam held a news conference at its office in Keishampat here where the student and his parents were present.

Moirangthem Angamba, president of Desam, said beating up a student severely for misbehaving was against the rights of the student.

“There was an exchange of words between the teacher and our volunteers that brought about the unfortunate incident. We are not the authority but our student body is a pressure group and we have the right to safeguard the rights of students,” said the student leader.

Angamba said this was not the first case of a student being chased and beaten up at the veranda of the school. He said the student body got involved in the matter to prohibit further torture of students by teachers.

As for Sharma, he said the class was very noisy. He beat Satyam because the boy was back-chatting him. He had said ‘yes’ when asked, “Can’t you remain silent?” However, Satyam told Desam that he had said yes when the teacher asked him, “Will you remain silent?” [Actually Sharma should get his grammar right, if the boy had answered ‘no’, [no, I can’t] rather than ‘yes’ [yes, I can] then he could be accused of talking back.]

Sharma is still befuddled as to why his thighs (and other tender regions) were attacked by Desam’s sticks! “I can’t accept the way a student body takes up action against a teacher who tried to correct a student’s behaviour. I didn’t hit him to hurt him. It was a very short stick and hit his hand slowly but a number of times,” Sharma said.

“Where was the Desam during our schooldays ?” quipped a no-nosense guardian. “In fact, when I was in the third standard and the teacher summoned my mother to complain that I wasn’t doing my homework, my mother had retorted- why do you send for me? You are the teacher. Give him a few whacks and he’ll behave. Or send him to the principal for six of the best! How times have changed!”