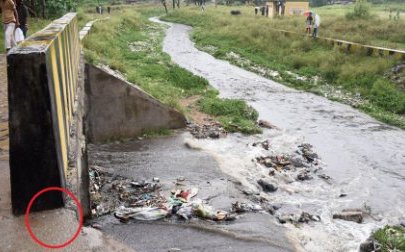 Open drainage has become a major problem for the people. They are serious health hazard, especially during the monsoon, when high water levels make drowning more likely and spread diseases more quickly. Plenty of fatal accidents are also happening due it. It is the issue of negligence. There is no system of checking or monitoring of uncovered drains.

In Hindpiri, Ranchi a five year old girl, Falak slipped into an open drain and lost her life yesterday.   She was a KG-1 student at KV Academy and was returning home from her tuition class with her friends, the drainage was not visible to her due to over flow of water and she slipped into it, as per the local news.

The drain was 4ft deep. The people present their tried to save her but could only catch her bag. The police recovered her body in Chutia , Ranchi. Falak was rushed to Guru Nanak Hospital, where she was declared brought dead.

This is not an only incident but these type of incidents takes place regularly taking away the lives of animals as well as people.

Similar incident took place few months back in SK Puri, Boring Road Patna where a 10 year old boy Deepak fell into the open drain while he was returning home after handing over the lunchbox to his father and the rescue team couldn’t even found his body. Drains are in miserable condition they have been left open. Some of them are having unsatisfactory condition cover and this is the main reason of accidents happening.

Same is the condition of the drains of Nala Road of Boring Road Patna.

Despite many people are getting washed away due to open drainage  why is municipal corporation ignoring it. Why are the drains left open?

It’s high time, now the municipality as well as the local people both need to pay attention towards it. Life is very precious. It should not be loosed due to these small negligence.

letter to the editor, Patna