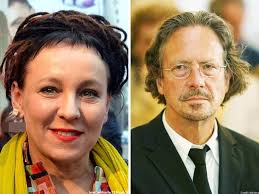 Before the announcement of Nobel Prize winner many Indian did not know who Olga Tokarczuk is because she is one of Poland’s best-known authors. She won the Booker International Prize in 2018 for Flights, which combines tales of modern – day travel with the story of a 17th-century anatomist who dissected his own amputated leg and the journey of composer Frederic Chopin’s heart from Paris to Warsaw after his death.

Peter Handke on the other hand is the one who once wanted to abolish the Nobel Prize. He once attracted controversy for his support of the Serbs during the 1990s Balkan wars. He through his essay, Justice for Serbia, he accused Western media of depicting Serbs as aggressors in the wars that led to the breakup of Yugoslavia.

Olga Tokarczuk, a Polish author and Peter Handke, an Austrian author were honored with the prestigious noble prize in literature for the year 2018 and 2019 respectively this year.

Last year the prize was postponed for the first time in 70 years due to a sexual harassment scandal and this year the same award for 2018 was given to a Polish author Olga Tokarczuk.

Olga Tokarczuk novel, ‘Ksiegi Jakubowe’ (‘The books of Jacob’), won the prize for displaying a “narrative imagination that represents the crossing of boundaries as a form of life”. The Swedish Academy described the Polish author as someone who “never views reality as something stable or everlasting. She constructs her novels in a tension between cultural opposites; nature versus culture, reason versus madness, male versus female, home versus alienation”. She is the 15th woman to win the Nobel Literature Prize and won the International Booker prize in 2018.

Peter Handke, won this prize for his influential work that with linguistic ingenuity has explored the periphery and the specificity of human experience. The academy praised his work by saying it as the extraordinary attention to landscape and the material presence of the world, which has made cinema and painting one of his greatest sources of inspiration.

Mr. Handke and Ms. Tokarczuk both win a cash prize of 9 million Kronor ($915,000). Along with the money they will be honored with a medal and a diploma. They both will receive these at a formal ceremony in Sweden on 10th December. December 10th is the death anniversary of Alfred Nobel, a Swedish industrialist, a dynamite inventor and also an establisher of Nobel Prizes and Nobel Literature Prize is considered as the world’s most prestigious literature prize and since 1901, it had been awarded to 116 people, of which 15 are women.