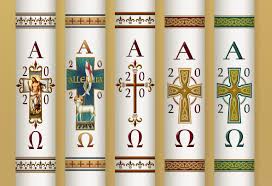 Tonight, as hundreds of Catholics in Bihar at home and elsewhere, watch Archbishop William D’Souza SJ perform the traditional ritual dedication of the Pascal candle on their TVs, laptops or mobile phones, via the Newsnet YouTube channel, they will be bound together in celebration and worship.

Behind this effort is a three member team, one a Catholic, one a Hindu, and one a Muslim. For four days, Ram Kumar and Syed Haque have been under lockdown in the sprawling Patna Women’s College Campus, sorting out the technicalities and getting the job done.

The three of us juggle responsibilities, there are two cameras, vision and audio mixing, lights, sound, camera and streaming equipment to handle. Working out the logistics in a small chapel, with the control room being in a tiny sacristy, doing the work of six people: light man, audio engineer, camera persons, vision mixer , and stream watcher and trying to maintain covid-19 safety protocols simultaneously isn’t all that simple.

For Ram and Syed, with no experience of the intricacies of worship during the Holy Week, it has been a surreal experience.  To manage live coordination with no talkback facility in an environment where the minimal movement must be there on the chapel ‘floor’ so that the sanctity of the Mass is maintained, isn’t easy.

The convent chapel is also a place for quiet reflection, and as every Catholic knows, religious orders have their own rules of silence and meditation during Maundy Thursday and specially Good Friday. Visual Media personnel setting up an electronic field production event are used to bustling about, calling out orders, and even using the occasional expletive once in a while when a wire snaps or a connection goes awry.

Now the three of us  literally had to walk on tiptoe, whisper, and bite our tongues hard when we wanted to curse, when the whole building is as silent as the tomb, even a normal conversation would echo throughout the building. And, let me tell you, when Syed, suddenly sniggered over something, he was paralyzed with cold fear  when he encountered the stern stare of a disapproving elderly nun who was meditating at the back of the chapel!

The greatest challenge came on Good Friday. The liturgical team thought it would be a good idea to show  some clippings from the film ‘Passion of the Christ ‘ during the Way of the Cross. One of the tech team members was a little bit apprehensive about the YouTube guidelines. The head of the liturgical team said that since there were already so many versions of meditation on Christ’s passion using clips from the film already on YouTube, Passion of the Christ it was possible that we would have no problems.

Now I was in the chapel, synchronizing the visuals from my laptop which were being projected on the wall beside the altar. Everything seems to be going fine. Meanwhile in the sacristy, Syed, who is doing the double job of vision mixing and stream monitoring sees that the stream has been pulled off the air and deleted because of a copyright issue : the clip from Passion of the Christ!

Syed saw the problem. He was in the sacristy. He couldn’t call out or anything. The Way of the Cross was in progress. Father Shekhar who was monitoring the stream on his mobile phone, frantically signaled. Ram had left his camera (which was locked on the visuals on the wall) and went to the control room, hastily making another stream. In the meanwhile I left my place at the projector and pointed camera two at the tabernacle, then rushed to the ‘control room’ and switched the visual. In the meanwhile my cell phone is going berserk with scores of messages. I quickly manage to resend the links to the new stream over whatsapp. The way of the Cross continues in the Chapel, the visual on the stream is of the tabernacle. I get back to my post at the laptop and projector. A minute later, Fr Shekhar taps me. The live chat on the stream hadn’t been disabled. Messages were popping up. There was nothing that could be done. We had to wait till the Way of the Cross was over.

While the Archbishop was being vested. Cameras and microphones had to be repositioned. In the meanwhile, I had to create a new stream for the mass, ensuring that the live chat facility  was disabled. As though this wasn’t a challenge enough, the streaming equipment starts behaving strangely. I want to scream, but can’t. I’m in the sacristy, Mass is in progress. Hymns are being sung. I mutter to the Man Upstairs, “Look here, it’s your people, it’s your show, so you better do something!” A tense 40 seconds later, the livestream kicks in, the broadband router is delivering correct speed, and we’re live once again.

It’s time for the gospel reading. Positions have to be changed, I head back to take over from Syed, the switcher. He goes out to take over Camera one. Only I can operate the switcher for the gospel, because the Archbishop speaks the words of Christ, The Vicar General is the narrator and the Archbishop’s Secretary reads the words of all the other characters and the crowd. Of the three, I’m the only one familiar with the gospel so I can switch the cameras on time and not miss the words of Christ which are very limited.

As we prepare for the Easter Vigil, we will now be trying to use the limited resources to bring optimum lighting, sound and visual to make your Easter Night a joyous and prayerful experience. When you turn on your TVs , Computers and mobile phones tonight, please send up a prayer for Ram and Syed, who have left the safety of their houses and families to make our Journey of faith possible.