By Shradha Chhetry on September 11, 2019Comments Off on 76 year old mends shoes in the street 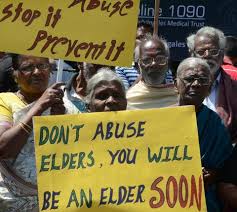 ‘Sometimes I have to go home with empty hands’ said Chandra Ram, a 76 year old cobbler who sits under a tree outside Patna Women’s College.

A resident of Samastipur , Chandra Ram, then in his late fifties, migrated to the Bihar capital 20 years ago after his wife died. He had enough assets to live with and sons too who could have looked after him.

“Just after my wife passed away, my sons grabbed whatever I had and began mistreating me. So I had to move to Patna to take shelter in my daughter’s home.”

It has been 18 years since he started mending the shoes of passers by. It was a means of earning an adequate livelihood, but as the time passed, his customers started dwindling. The reasons are many. Times have changed. Not many people stop to have their shoes repaired. Now the young flaunt branded shoes that offer ‘footwear servicing’ by modern shoe repair chains.

When asked if this business helps him get enough money, he said earlier he used to earn enough but now these days it has become quite hard to earn enough for a meal but somehow he manages.

It’s disheartening to see that at the age of 76, (when senior citizens are supposed to lead a gentle retired life) Chandra is struggling to earn his bread, working continuously for 8 hours whether it’s a hot scorching sunny day or heavy rainy day, because his sons and daughter-in-laws abandoned him.

One knows that like Chandra Ram, there are so many elder people as well who are suffering the same pain..

Ill treatment by their children have made so many old parents homeless. There are numerous cases of elder abuse in India. The government has intervened by trying to rectify the situation by promulgating laws.

Just recently, the Delhi High Court passed an order stating that adults who live in their parents’ house and abuse them can be evicted from the property.

Many are aware of a law that protects senior citizens from abuse and abandonment – the Maintenance and Welfare of Parents and Senior Citizens Act, 2007.

Elder children might keep their parents with them with fear of being punished but what’s the use when they are still mistreating them inside the four walls. Some elders come up and raise their voices against the violence but mostly the middle class people don’t utter a single word afraid of the falling of their family ‘reputation’ in society circles.

Laws can be made but laws alone cannot change the mind-sets. This can be change only with the help of education as it is the key to tackle with every problem; with the help of awareness campaigns we can educate the elders as well as their adult children. Elder abuse isn’t a private matter. It has become a public concern as well and it is high time for us to address this issue.