August 7 (Monday) will see a great Jesuit management Guru laid to rest at Jamshedpur in Jharkhand.

Father Edward Hugh McGrath, one of the founding fathers of B-school XLRI, expired after prolonged illness. He spent his last days of life in Fr Guidera Residence, XLRI. Fr McGrath was director of XLRI from 1959 to 62, and 1981-82.

Fr McGrath was born on 7 January, 1923, to Dr John F McGrath and Lillian McGrath in New York. He came to India in 1949, a time when the country had just gained freedom and was painstakingly building the foundation for a democratic state. It was Fr McGrath’s resolute faith in the three vows that a Jesuit undertakes: poverty, chastity and obedience that led him to India. His entire life revolved around these three vows.

“My close interaction with Fr McGrath was from 1976-78, when I was a student at XLRI. He taught our batch three courses. His basic pedagogy was learn by doing. I have known Fr McGrath for the last 45 years and lived with him for several years. What I admired most about him was his love for students, love for poor, his hard work and his fantastic sense of humour. He was truly a great human being and a wonderful priest” commented Fr E Abraham, director of XLRI.

The death occurred at Fr Guidera Residence inside the campus of Xavier Labour Relations Institute (XLRI) he co-founded at Jamshedpur, India. McGrath had enjoyed good health and led a normal life. However, toward the end, a leg pain bound him to a wheel chair.

Father Jerome Sequeira, socius of the Jamshedpur province, said McGrath’s funeral service would be at 10 am on August 7 at the St Joseph’s Cathedral, Golmuri. The burial will follow immediately  at Jesu Bhavan, Mango, a Jamshedpur suburb.

Father Tony Raj, a member of the Jamshedpur province , said McGrath “was instrumental in starting labor relations as a domain of theory and practice in India.

McGrath worked with trade unions, taught extensively in XLRI, and Xavier Institute for Management based at Bhubaneswar, Odisha. “He also set up Human Life Centre, a supplementary skills learning center in Bhubaneswar on firmer ground setting its Vision, Mission and Goal. Writer of the Best seller, ‘Basic Managerial Skills for All,’ sort of a Bible for entry level managers,” Father Raj told a catholic news agency. One of McGrath’s admirers is Ratan Tata, former chairperson of Tata Sons. “Father McGrath was amongst the first few people I met when I was assigned to Jamshedpur. Over the years I have met Fr. McGrath on many occasions and have watched with admiration, the growth of XLRI in Jamshedpur to an institution of significance and standing,” Tata wrote in a foreword to a book on the Jesuit priest released on December 10, 2016.

McGrath, Tata added, had become “as much of an institution himself in Jamshedpur as the formal institution with which he has been so closely associated.”

Jesuit Father E Abraham, current XLRI director and an alumnus, recalled McGrath’s basic pedagogy was to learn by doing. “What I admired most about him was his love for students, love for poor, his hard work and his fantastic sense of humor. He was truly a great human being and a wonderful priest,” said the priest who had close interaction with McGrath for 45 years.

Jittu Singh, former faculty who knew McGrath for nearly 50 years, hailed him as “a true friend and an enthusiastic faculty colleague.”

McGrath arrived in Jamshedpur in 1949; two years after six Jesuits from Maryland in US started the province.

XLRI was founded in the same year by visionary Jesuit Father Quinn Enright. He obtained permission from Bihar University to prepare candidates for Ranchi University’s MA degree in Labor and Social Welfare.

XLRI is a school of labor relations that was born out of a dream to strengthen industrial India, by strengthening trade unions and personnel managers while practicing ethical management.

Fr. Enright directed XLRI from 1949 and when he left for the US to 1959 McGrath took over and led it for three years. He again became the director for a year in 1981. He conducted several courses for management and trade union groups at XLRI. Under his guidance, during 1960s, XLRI started offering courses for unions in collaboration with the steel unions at the Steel Worker College.

McGrath was born on January 7, 1923, to Dr John F McGrath and Lillian McGrath in New York.

On arriving in Jamshedpur he taught fourth graders in Loyola School and took public speaking classes for XLRI students.

After spending a year in Jamshedpur, McGrath left for theological studies at Kurseong. He was ordained a priest on November 21, 1953.

Four years later, he returned to XLRI, to work with Father Enright. McGrath managed the institute with a team of priests and lay colleagues and brought it on the map of the country’s finest business schools.

He conducted several courses for management and trade union groups at XLRI. During the 1960s, under his guidance XLRI started offering courses for unions in collaboration with the steel union at the Steel Worker College.

The legendary priest also fostered the institute’s alumni network. “XLRI can claim to have the most active networking of Alumni amongst Indian Business Schools. Every year the alumni chapters have their get-togethers in cities across India and abroad,” said Professor Pranabesh Ray, chairperson of Alumni, XLRI at the book release.

In 1987 Fr McGrath moved to the Human Life Centre in Bhubaneswar, Odisha, and took over as director there. He developed vocational training courses, viz., written and spoken English, computer operating, tailoring, and carpentry among others. 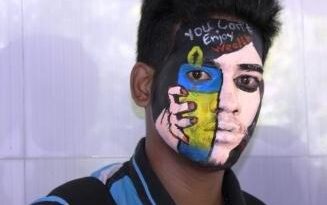 Why students Painted their faces at Xavier’s 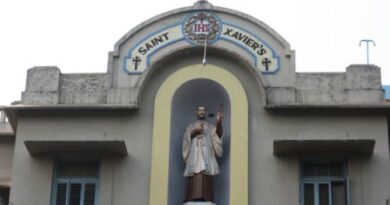 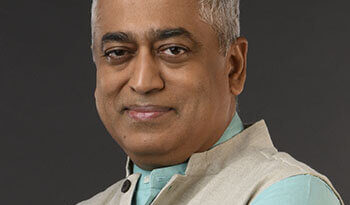