At a Press Conference held in Delhi on 18 January, the Government spokesman said, “The Nation will celebrate its 74th Republic Day on January 26, 2023.  The celebrations include the traditional march past at Kartavya Path comprising a grand parade by the contingents of the Armed Forces & Paramilitary Forces; tableaux display by the States and Central Ministries/Departments; cultural performances by children; acrobatic motorcycle rides and a fly-past, besides Beating the Retreat ceremony.

The Republic Day celebrations are going to be week-long commencing on 23rd January, the birth anniversary of great national icon Netaji Subhas Chandra Bose and culminate on 30th January which is observed as Martyrs’ Day…Many new events are being organised as part of the Republic Day celebrations this year. These include Military Tattoo & Tribal dance festival; Veer Gatha 2.0; second edition of Vande Bharatam dance competition; performances of Military & Coast Guard bands at the National War Memorial; an All-India School Band Competition at the NWM; a Drone Show and projection mapping during Beating the Retreat ceremony”.

This definitely needs to be applauded. There will be much pomp and pageantry at the grand parade; the muscle of India’s military might will be demonstrated with full spectacle. The Egyptian President will be the Chief Guest with a huge entourage at the flag hoisting ceremony and parade!

During the day there will be the plethora of speeches everywhere; politician after politician will wax eloquent. Some may even claim (and many will believe their lies!) that India became a Republic only after 2014! Few will remember that on that first Republic Day: 26 January 1950, we the people of India, began to live by a visionary Constitution.

The day (26 January) itself is very significant: it was chosen by our freedom fighters and the first Government of India, because on this day in 1930, the Indian National Congress revealed Purna Swaraj, the declaration of India’s independence from the colonial rule. Celebrating the [email protected] 74 is important and pregnant with meaning!

The Heart of the Republic

At the heart of Celebrating the [email protected] 74, is the Preamble of the Constitution, which unequivocally states “we, the people of India, having solemnly resolved to constitute India into a sovereign socialist secular democratic republic and to secure to all its citizens: justice, social, economic and political; liberty of thought, expression, belief, faith and worship; equality of status and of opportunity; and to promote among them all fraternity assuring the dignity of the individual and the unity and integrity of the nation” .  A couple of months earlier, on 26 November 1949, the Constituent Assembly ‘adopted, enacted and gave to ourselves’ a visionary Constitution.

Celebrating the [email protected] 74 is a painful reminder of the reality today.

In February 2019, Justice DY Chandrachud (now Chief Justice of India), delivering the Justice K. T. Desai Memorial Lecture at the Bombay High Court on ‘Why Constitution Matters’, strongly said, “the people who work the constitution may go terribly wrong and sometimes they do as when we jail a cartoonist for sedition or when jail instead of bail is given to a blogger who is critical of our religious architecture. When a mob lynches a person for the food that she or he eats it is the constitution which is lynched. When we deny to human beings the power of love for reasons of religion or caste it is the constitution which is made to weep. That is exactly what happened yesterday when a groom belonging to the Dalit community was asked to climb down from a horse in a wedding procession. Let’s make no two bones about it. It is the constitution which weeps when we read of such incidents”

Celebrating the [email protected] 74 is the Supreme Court collegium challenging the government’s rejection of Advocate Saurabh Kirpal, as a Delhi High Court judge because he is gay and has a foreign national as a partner.

Kirpal is the son of former Chief Justice of India B.N. Kirpal; he has vast knowledge of commercial law and successfully helped fight a decade-long legal battle for LGBT rights, culminating in the apex court de-criminalising gay sex between consenting adults in September 2018.

The collegium says, “Decisions of the constitution bench of this court have established the constitutional position that every individual is entitled to maintain their own dignity and individuality, based on sexual orientation. about his orientation…In view of the constitutionally recognised rights which the candidate espouses, it would be manifestly contrary to the constitutional principles laid down by the Supreme Court to reject his candidature on that ground. Shri Saurabh Kirpal possesses competence, integrity and intellect. His appointment will add value to the bench of Delhi High Court and provide inclusion and diversity.  His conduct and behaviour have been above board.”

Celebrating the [email protected] 74 is the courage to take on those who destroy the independence and the autonomous functioning of several Constitutional and other statutory bodies.

The Central Bureau of Investigation (CBI), the Enforcement Directorate (ED) the National Investigating Agency (NIA) have become ‘caged parrots. The police kowtows to those who have rendered them spineless!

All these agencies, together with the Income Tax Department, are systematically used (rather, abused) to throttle voices of dissent and anyone who stands up for truth and justice!

The Reserve Bank of India (RBI) is browbeaten to bend backwards to cater to the whims and fancies of a government that has sent the country into a downward economic spiral!

Media, the fourth pillar of a vibrant democracy, has been made largely impotent, completely ‘godified‘! Other important bodies, like the Information Commission, the National Human Rights Commission (NHRC) and even the National Commission for Minorities (NCM) have been made toothless and filled with pliable henchmen!

Celebrating the [email protected] 74 is the awareness that in our nation, the rich become richer and the poor become poorer.

Oxfam India’s report which was released on the opening day of the World Economic Forum in Davos, Switzerland reveals that the total number of billionaires in India increased from 102 in 2020 to 166 billionaires in 2022.From 2012 to 2021, 40 percent of the wealth created in India has gone to just one percent of the population and only a mere 3 percent of the wealth has gone to the bottom 50 percent. The combined wealth of India’s 100 richest has touched $660 billion (INR 54.12 lakh crore) – an amount that could fund the entire Union Budget for more than 18 months.

Freedom of speech and expression is muzzled as never before. The Government has banned the people of India from watching a film by the BBC on the Gujarat Carnage 2002! Besides on several other global indicators the country has reached abysmal depths!

Celebrating the [email protected] 74 is the openness to internalise the passionate speech by Dr BR Ambedkar to the Constituent Assembly (25 November 1949).

He said,“If we wish to maintain democracy not merely in form, but also in fact, what must we do? The first thing in my judgement we must do is to hold fast to constitutional methods of achieving our social and economic objectives…. where constitutional methods are open, there can be no justification for (..) unconstitutional methods. These methods are nothing but the Grammar of Anarchy and the sooner they are abandoned, the better for us. The second thing we must do is to observe the caution which John Stuart Mill has given to all who are interested in the maintenance of democracy, namely, not “to lay their liberties at the feet of even a great man, or to trust him with power which enable him to subvert their institutions in politics, Bhakti or hero-worship is a sure road to degradation and to eventual dictatorship. The third thing we must do is not to be content with mere political democracy. We must make our political democracy a social democracy as well. Political democracy cannot last unless there lies at the base of it, social democracy. We must be determined to defend our independence with the last drop of our blood!”

The [email protected] 74 is above all, is the courage of we the people to take a visible and vocal stand today and to make our Constitution and all that is enshrined in it – a reality for every single citizen of India! 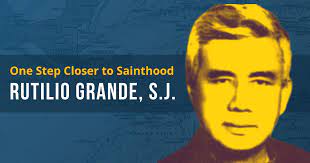 Rutilio Grande: A Model for Our Church Today!

Mixed Stance on Standing for the National Anthem 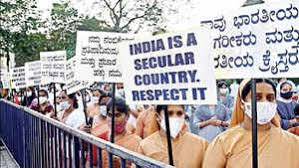 One thought on “Celebrating the Republic @74”